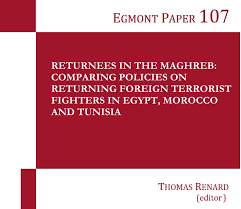 The Egmont Institute, an independent Think-thank based in Brussels, has praised Morocco’s counterterrorism policy, saying the North African Kingdom has been successful in preventing terrorist attacks and getting intelligence information, which has been helpful locally and internationally.

In its latest report entitled: “Returnees in the Maghreb: Comparing Policies on returning Foreign Fighters in Egypt, Morocco and Tunisia”, the experts said that Morocco is by far the most advanced in dealing with returnees in the region.

The country has taken legal measures and strengthened as well its security services accordingly. It has also developed deradicalization programs in prison and is working on other initiatives with former radicals, underlined the authors of the report.

In contrast, Tunisia and Egypt are much less transparent and systematic in their approaches. It appears that their capacities are limited, and their approach is very narrowly security-driven, said the Egmont Institute report.

According to this study, Morocco has engaged, since 2005, in the reform of the religious sphere with the aim to counter radical religious narratives, while preserving the Moroccan version of Islam, which is described as moderate.

This reform helped to modernize religious institutions such the Council of Religious Scholars and the Ministry of Religious Affairs, ensuring greater transparency when it comes to the financing of mosques and other religious activities. Morocco also contributes to the training of future imams based in France and other European countries at the Rabat Mohammed VI Institute for the Training of Imams.

According to the Egmont analysis, the return of foreign fighters from war zone requires a strong EU–Morocco cooperation, stressing the need to address the socioeconomic and governance challenges, along with softer prevention programs.

The report calls on the EU and other international partners of Morocco to remain committed to encouraging and supporting efforts aimed at reducing the socio economic disparities to counter major conducive factors to radicalization.