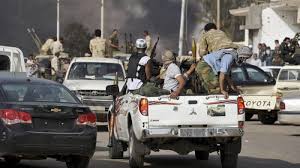 The African Union Troika is holding this Tuesday a summit meeting in Cairo to discuss the political and security situation in Libya and means to contain the current crisis and eradicate terrorism.

The summit hosted by Abdel Fattah Al Sisi, current president of the African Union, will be attended by the presidents of Rwanda, South Africa, the Democratic Republic of the Congo, and chairman of the AU Commission Moussa Faki.

The meeting will discuss a political way forward to the Libyan military escalation, which has been ongoing since April 4 after east-based and al-Sisi-backed army commander Khalifa Haftar launched an offensive to control capital Tripoli.

The offensive, condemned by the UN, has stalled at the outskirts on Tripoli where forces of the Government of National Accord (GNA) have been keeping Haftar’s forces at bay.

At least 254 people have been killed, over 1,200 have been injured in the hostilities around Libya’s Tripoli, the World Health Organization in Libya said.

Around 25,000 people have been forced to leave their homes.

The AU had planned to host a reconciliation summit in July between the warring Libyan factions.

Also on Tuesday, the presidents of Chad, Djibouti, Rwanda, the Democratic Republic of the Congo, Somalia, and South Africa will review possibilities of dealing with Sudan’s current developments and how to contribute to backing stability and peace there.

This meeting is also attended by the Ethiopian deputy prime minister, South Sudan’s presidential adviser for security affairs, the Ugandan and Kenyan foreign ministers, and Nigerian undersecretary of foreign affairs, as well as chairman of the African Union Commission Moussa Faki.