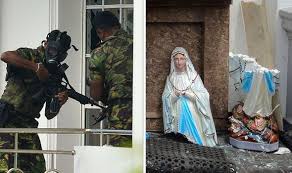 A 38-year-old Moroccan woman was injured in Sunday’s terrorist attacks in Sri Lanka, the Moroccan embassy in India said on Monday.

Hajar A., a flight attendant working for Saudi Airlines carrier, was injured in a bomb blast in a hotel in Colombo that claimed many lives, according to the Moroccan embassy.

At the request of the embassy, the Moroccan victim will be transferred from a public hospital to a specialized clinic to receive the necessary medical care.

Sri Lankan police sources on Monday announced a new death toll of 290 and 500 wounded in the series of bombings that targeted hotels and churches across the country.

King Mohammed had condemned the bombings as “a heinous and terrorist act”.

In a message of condolences sent to president of Sri Lanka Maithripala Sirisena, the Sovereign said “Morocco strongly condemns this heinous, terrorist act which is utterly inconsistent with the teachings of all religions and with human values”.

“I was deeply shocked and saddened by the news of the terrorist attacks on hotels and churches in Sri Lanka, during Easter services, in which scores of innocent victims unfortunately lost their lives,” said the Monarch in his message.