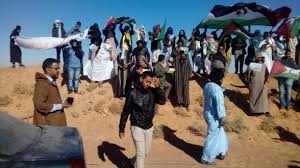 The Sahrawis sequestered in the Tindouf camps can no longer take it. They are fed up with the corrupt, feckless and repressive leaders of the Polisario separatists, who are armed, funded and sheltered by the Algerian regime.

These Sahrawis held against their will organized lately in the so-called “wilaya of Boujdour” a sit-in to protest against their dire situation, enduring sufferings, systematic violations of their human rights and the siege imposed on them by the Polisario armed militiamen.

According to some press reports, the protesters were initially planning to focus on social woes. However, the unbearable status quo of the Sahara issue led the camps inhabitants to rise up against the Polisario leaders who were gathering at the so-called “Sahrawi National Council” (Sahrawi Parliament) in presence of the Polisario chief Brahim Ghali.

The protesters have thus moved their sit-in to the site where the separatists’ leaders were gathering to vent their anger and denounce the lamentable situation of the sequestered Sahrawis, taken hostage by the Polisario to serve the agenda of the Algerian Generals.

The demonstrators clashed with the inner circles and operatives of the Polisario leadership. Fearing to see the situation getting out of hand and leading to a bloodshed, Brahim Ghali asked his so-called Interior Minister Mustapha Mohamed Ali Sid El Bashir to go out and meet the protesters.

In an attempt to defuse tension and contain a volatile situation, El Bachir offered to receive some representatives of the protesters to discuss their grievances.

The furious sequestered Sahrawis warned that procrastination tactics will not work and that their protest movement will continue until their demands are fulfilled.