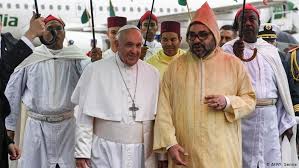 The African Union has welcomed the Jerusalem/Al-Quds appeal launched from Rabat by King Mohammed VI and Pope Francis during the Pope’s historic visit to Morocco in March.

King Mohammed VI has received in this connection a letter from the President of the African Union Commission Moussa Faki Mahamat, who expressed his conviction that the call, which takes place in a particularly worrying global context, “will contribute immensely” to the efforts to preserve the multi-religious specific character, as well as the spiritual dimension and identity of al-Quds.

He also affirmed that the AU, which fully associates itself with this initiative, will provide all possible political support for this Call.

Moussa Faki Mahamat recalled in his letter to the Sovereign that the AU Peace and Security Council also welcomed the Al-Quds appeal in a communiqué issued earlier this April.