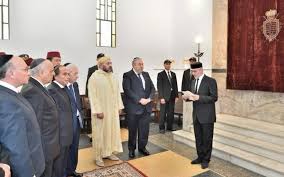 Morocco’s King Mohammed VI, Commander of the Faithful, has ordered the holding of elections of bodies representing the Moroccan Israelite communities, said a press release issued Friday by the Interior ministry, noting that these polls have not been organized since 1969.

The Moroccan Sovereign also urged the Interior Minister to make sure that these elections are held henceforth on a periodic basis pursuant to the provisions of Dahir of May 7, 1945 related to the reorganization of the committees of the Israelite communities, added the statement of the interior department.

Monday, King Mohammed VI visited several rehabilitation projects of the old medina of Fez and launched the restoration works of “Al Batha” museum and the building works of the Jewish culture museum.

This museum will showcase the Jewish legacy, its rituals and specific features, an intrinsic part of Morocco’s heritage for more than three thousand years.

This landmark project celebrates the culture and values of tolerance and coexistence deeply rooted in the old city of Fez, which welcomed the Muslims and the Jews who were expelled from Spain.

Morocco had engaged since early 2000 in a large-scale project to refurbish synagogues and other Jewish monuments to preserve the unique and historic aspects of Moroccan culture and King Mohammed VI has repeatedly renewed his commitment to defend the faith and the community of believers, and to uphold freedom of religion for all believers in his country.

As is enshrined in the Kingdom’s new Constitution, the Hebrew heritage is indeed one of the time-honored components of Morocco’s national identity.