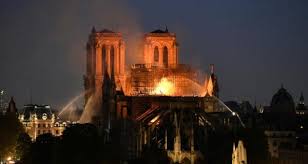 Morocco has decided to make a financial contribution to the reconstruction of Notre-Dame cathedral, the landmark Gothic monument in Paris, which caught fire last Monday evening.

The announcement was made by Morocco’s ambassador to France Chakib Benmoussa at a meeting he held Thursday with Archbishop of Paris Michel Aupetit.

The Ambassador informed the Archbishop of Paris that, at the high instruction of King Mohammed VI, the Commander of the Faithful, the Kingdom of Morocco has decided to make a financial contribution to the reconstruction of Notre-Dame cathedral, says the embassy in a press release.

During the meeting, the Ambassador reiterated to the Archbishop of Paris the support, compassion and solidarity expressed by the King, on behalf of all Moroccans, following the fire that devastated the Cathedral, symbol of the city of Paris, the history of France and a place of recollection for millions of faithful, adds the press release.

The Archbishop of Paris seized the opportunity to bring up the historic visit Pope Francis paid lately to Morocco at the invitation of King Mohammed VI and the landmark events that took place during this visit.

In a message to French President Emmanuel Macron following the incident, King Mohammed VI expressed solidarity and sympathy with the French people, saying that “this disaster affects not only one of the most emblematic historical monuments of the city of Paris, but also a site of prayers for millions of worshipers from around the world.”

A major fire ravaged Monday the French landmark monument, described by many as an architectural jewel of a collective memory, and the location of many great national and private events.

The religious site, which dates back to the 12th century, is among one of Europe’s top relics, attracting some 13 million visitors a year.