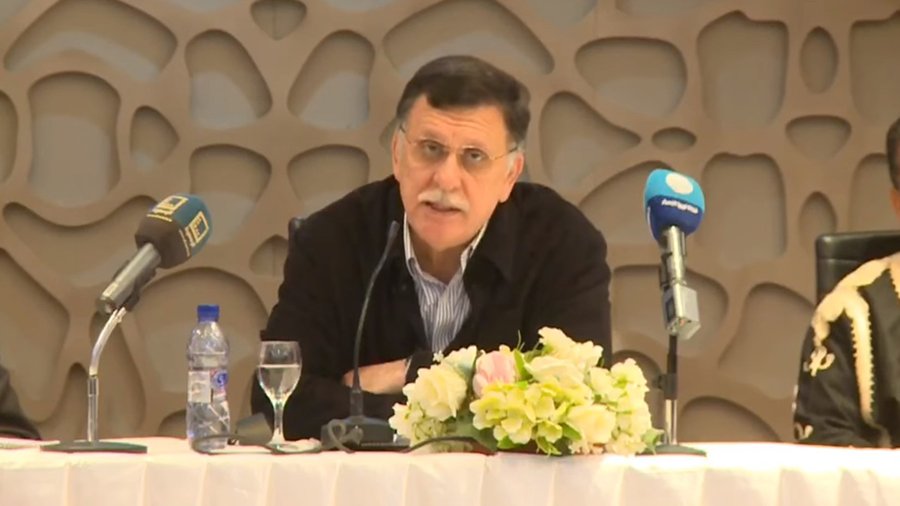 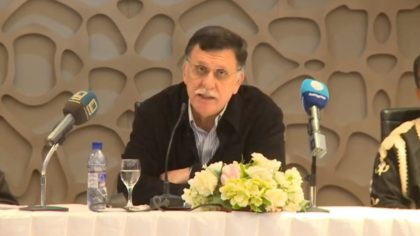 Head of the UN-backed Libyan Presidential Council (PC) Tuesday said he would not dialogue with Khalifa Haftar whose forces have been trying to take control of capital Tripoli over the past two weeks.

Faiez Serraj rejected dialogue with Haftar during a meeting with elders and shura councils’ members of Sahil and Mountain districts in western Libya, Libya Observer reported, adding the meeting discussed the military confrontation that has taken place since April 4 when Haftar launched an offensive to seize Tripoli.

Serraj noted that the offensive, which started while the UN Chief Antonio Guterres was in Tripoli, would not have taken place if Haftar had not received support from some countries, the media said.

Forces aligned with PC have managed to keep Haftar’s forces at bay, at the outskirts of the capital.

The Libya Observer however reported in the early hours of Wednesday that several rockets had been fired at Tripoli, killing four people and injuring 23 others. The newspaper claimed Haftar’s forces were responsible for the attack.

The LNA rejected the report, saying it was not responsible for a rocket attack on Tripoli.
“Tonight, the Libyan army did not use heavy weapons during military operations,” LNA spokesman Khalifa Obeidi told the Russian news agency Sputnik. He accused some groups operating in Libya of intentionally targeting residential neighborhoods in Tripoli to put the blame on the LNA.

Sputnik also reported that Qatari Foreign Minister Mohammed bin Abdulrahman Al-Thani has called for imposing an effective arms embargo on Khalifa Haftar and his LNA and suggested forcing the LNA leader to withdraw his troops from the territories seized during the army’s ongoing operation against Tripoli.

The Foreign Minister of Qatar, which is supporting the GNA, also stressed the need to prevent the countries supplying Haftar with arms and ammunition from doing so, added the Russian news agency.

Meanwhile, the conflict’s humanitarian toll is growing as 174 people were killed and 756 injured while almost 20,000 were displaced, according to latest UN tallies.

Haftar’s advance on Tripoli that he believes is in the hands of terrorists, in reference to Muslim Brotherhood, has sabotaged UN efforts for peace. A national reconciliation meeting scheduled for April 14-16 was scrapped.

Libya has been without a central government since the ouster of Muammar Gaddafi in a NATO-led revolution in 2011. The PC established in December 2015 is challenged by a rival administration in the east of the country, supported by Haftar’s LNA.

Serraj and Haftar met several times, the latest meeting having taken place in the UAE, where both foes promised to back a political resolution of the Libyan crisis and hold elections this year.