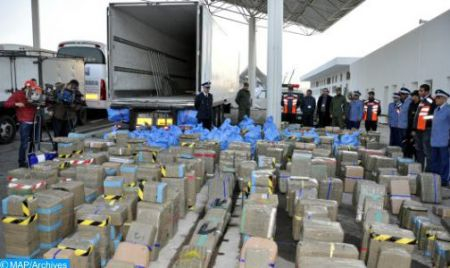 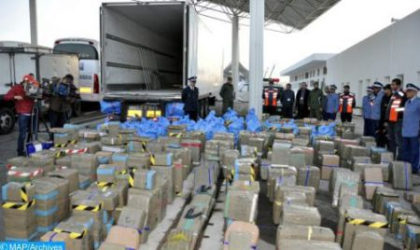 Moroccan security and customs services have foiled a drug smuggling attempt at Guerguarate crossing point, in the southernmost tip of the country on the borders with Mauritania.

The search operation, carried out Wednesday on the basis of accurate information provided by the Directorate General for Territory Surveillance (DGST), enabled the seizure of 11,940 tons of haschish onboard an international transport truck bound for Mali. The truck driver, 37, has been arrested.

The drug was concealed inside kitchen furniture onboard the trailer of a Morocco-registered truck, said the police in a statement, adding that the investigation led also to the arrest of the freight forwarder in charge of the customs clearance at the border post.

This operation is part of continued efforts made by police services to fight international drug and psychotropic pills trafficking.

In the Summer of 2016, Morocco had stepped up vigilance to counter trafficking on its Southern Borders and to clear the border area with Mauritania of all trafficking, including of drugs and weapons, and of illegal commercial activities.

Moroccan security services, in close cooperation with Mauritanian peers, tried to clear the areas, long considered by traffickers as a no man’s land, by building and securing a road linking the border post of Guerguarate to Mauritania.

Many observers had then noted that the Algeria-backed Polisario front is one of the biggest losers of any operation aiming to curb trafficking in North Africa. It is established that the separatist militia is engaged in all sorts of illicit activities, including arms trafficking