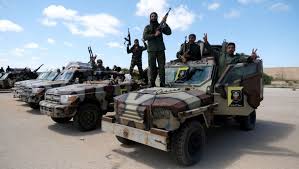 The UN mission in Libya (UNSMIL) has urged all parties to observe humanitarian truce in the suburbs of Tripoli to evacuate civilians and those wounded following the military offensive launched by General Khalifa Haftar of Eastern Libya to take control of the capital.

UN Secretary-General Antonio Guterres condemned on Monday the military escalation and ongoing fighting in and around Tripoli, including the aerial attack by a Libyan National Army (LNA) aircraft against Mitiga airport.

He also urged all parties to engage in immediate dialogue to reach a political solution, affirming that there is no military solution to the Libya conflict.

The UN Chief “reminds all parties of their obligations under international humanitarian law and international human rights law to ensure the safety of all civilians. All Libyans deserve peace, security, prosperity and respect for human rights”, said Mr. Stephane Dujarric, Spokesman for the UN Secretary-General.

Libya’s UN-backed Prime minister, Fayez Sarraj, has called the action by Haftar an attempted coup. Haftar and his forces appear to have gained ground along the outskirts of the capital, but Sarraj said government troops are prepared to confront them.

In Washington, Secretary of State Michael Pompeo expressed deep concern about fighting near Tripoli. “We have made clear that we oppose the military offensive by Khalifa Haftar’s forces and urge the immediate halt to these military operations against the Libyan capital”, he said, warning that this unilateral military campaign against Tripoli is endangering civilians and undermining prospects for a better future for all Libyans.

He also urged Libyan leaders to return to political negotiations mediated by UN Special Representative of the Secretary-General, affirming that a political solution is the only way to unify the country and provide a plan for security, stability, and prosperity for all Libyans.