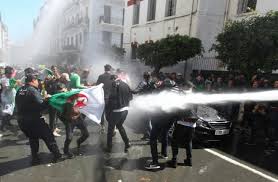 The Algerian Parliament Tuesday elected leader of the upper chamber of the Parliament as the country’s interim President for 90 days in replacement of Abdelaziz Bouteflika who stepped down one week ago.

Both chambers of the Algerian Parliament met Tuesday to elect an interim President to fill in the vacuum left by ailing Bouteflika who resigned on April 2 under street pressure and after he was abandoned by the army.

The lawmakers of the opposition did not take part in the vote and it did not take long for the Algerians to take to the street again in Algiers and in other cities to voice their rejection of the appointment of Bensalah, a longtime ally of Bouteflika.

A Cacique of the regime, dominated by the National Liberation Front (FLN) since independence in 1962, Bensaleh has been at the head of the Council of the Nation – the Upper House of Parliament – since 2002, just three years after Bouteflika became President in 1999.

And after Bouteflika suffered a stroke in 2013, Bensalah has often represented him in events at home and abroad.

However, the tens of thousands of Algerians, who have been staging demonstrations since mid-February, are demanding a change of the entire Bouteflika clan.

During the huge demonstrations staged across the country last Friday, following Bouteflika’s resignation, protesters called for the stepping down of the 3 Bs, namely Abdelkader Bensalah, current Prime Minister Nouredine Bedoui, and Tayeb Belaiz, head of the Constitutional Council for their connection with the Bouteflika regime.

On Tuesday, the thousands of protesters, mainly students, vowed to continue their protest as long as their calls for a total regime change are not heeded.

For the first time since the beginning of the peaceful protest movement in mid-February when Abdelaziz Bouteflika announced his plans to run for a fifth term, the police Tuesday tried to disperse the students with tear gas and water cannons, according to AFP.