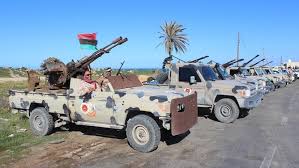 The US Secretary of State Mike Pompeo has called on Libyan east-based rogue military general Khalifa Haftar to stop his offensive to control capital Tripoli.

The Libyan capital Tripoli has become since late last week the target of Haftar’s Libyan National Army (LNA) after the military strongman ordered his troops to capture the city, despite UN efforts to unify the factions and rivals through a forum scheduled for 14-15 this month.

Haftar’s move dealt a blow to UN efforts to unify the country that fell apart following the death of former leader Muammar Gaddafi in 2011 in a NATO-backed revolution.

Pompeo in a statement expressed Washington’s concern over the offensive and called for immediate halt of the operation.

“We have made clear that we oppose the military offensive by Khalifa Haftar’s forces on Tripoli. Forces should return to status quo ante positions,” The statement reads.

“All involved parties have a responsibility to urgently de-escalate the situation, as the UN Security Council and G7 ministers emphasized on April 5.” The statement adds.

Pompeo also said the US opposes military intervention and endorses political solution to the Libyan crisis.

“There is no military solution to the Libya conflict. This is why the United States continues to press Libyan leaders, together with our international partners, to return to political negotiations mediated by UN Special Representative of the Secretary-General Ghassan Salame,” the statement further adds.

Haftar’s soldiers have confronted the allied forces of the UN-backed Government of National Accord (GNA) to the south of Tripoli in view of controlling the Mitiga International Airport, the unique operational airport near the Libyan capital.

LNA launched Monday airstrikes on the airport that was temporarily closed. However, the airport was partially reopened this Tuesday by the Libyan Civil Aviation Authority.

“The Civil Aviation Authority ordered to open the airspace over Mitiga and resume night flights from 7:00 p.m. up to 7:00 a.m. (local time) until further notice”, the body said on its Facebook page.

Amidst the deadly clashes, the US military command for Africa, AFRICOM, have temporally withdrawn US troops out of Libya.

In a statement, the US military command, which has worked in close collaboration with the GNA in the fight against terrorist groups, said it was evacuating a contingent of US forces due to unrest in Libya.

“We will continue to monitor conditions on the ground and assess the feasibility for renewed US military presence, as appropriate,” AFRICOM said.