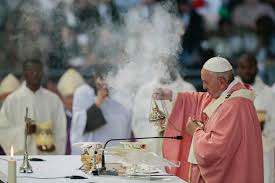 From Morocco, Pope calls for peace at masse for 10,000 catholics

Pope Francis wrapped up his two-day visit to Morocco with a mass attended by some 10,000 Catholics from across Morocco.

Pope Francis trip to Rabat was a chance to highlight the active role played by Morocco in promoting inter-religious dialogue at home and internationally.

The Pontiff encouraged greater fraternity between Christians and Muslims in Morocco, and urged Catholics to abstain from proselytism.

In the majority Muslim country, Jews and Christians have their places of worship and can practice their faith, a right that is guaranteed and protected by King Mohammed VI, the Commander of the Faithful.

“As Commander of the Faithful, I cannot speak of the Land of Islam, as if only Muslims lived there. I am keen to ensure freedom to practice the religions of the Book and I am the guarantor of that freedom. I protect Moroccan Jews as well as Christians from other countries, who are living in Morocco,” the King said in a speech at the esplanade of Hassan Mosque on the first day of the Pope’s visit.

The great welcome the Pope and his delegation had both by the Monarch and the Moroccan people sends in itself a much needed message of tolerance in a world torn by tension and misunderstandings.

Despite the rain, thousands lined up on the street to greet the Monarch and the Pope and thousand more attended their speeches in the esplanade.

At the Imams’ training institute, Adhan, Adonai and Ave Mariah were sang before the Pope and the King who spared no effort to champion in Morocco and abroad the genuine face of moderate Islam.

The Pope’s visit was also an occasion to make a plea for the protection of the multi-religious character of the holy city of Jerusalem as a sacred city for the followers of the three Abrahamic religions.

“We believe it is important to preserve the Holy City of Jerusalem / Al-Quds Al-Sharif as a shared heritage of humankind and to safeguard it, above all for the believers of the three monotheistic religions, as a symbol of peaceful coexistence and as a meeting place where mutual esteem and dialogue are fostered”, said the two leaders.

They also affirmed that the uniqueness, the spiritual dimension and special identity of Al-Quds Al-Sharif must be preserved and enhanced.

The Vatican media section reported that 1.5 billion viewers around the world followed the first day of the pope’s visit to Morocco via the Vatican canals, Christian churches and international channels and that the numbers will be even greater Sunday.

Some 200 foreign journalists, all media combined, have covered this historic visit of the Pope in Morocco, “a country that plays a singular role in contemporary Islam and where inter-religious dialogue is fruitful”, writes the Vatican information website.