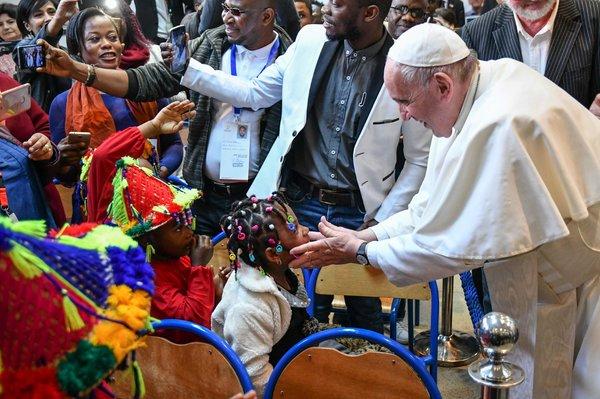 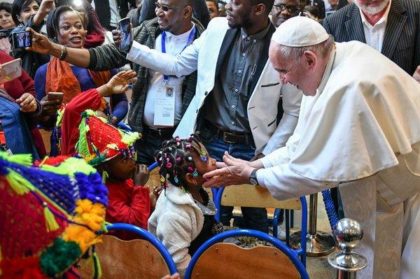 Pope Francis, who made a lightening two-day trip to Rabat, praised Morocco for adopting a policy that guarantees protection and integration of migrants.

Morocco “will continue to be an example of humanity for migrants and refugees within the international community, so that here, as elsewhere, they can find generous welcome and protection, a better life and a dignified integration into society,” said the Pontiff sovereign in a speech on his first day of his visit to Morocco in the Hassan mosque esplanade.

The North African kingdom has stood out in Africa and the region as the only country that has a comprehensive migration policy offering residency status to migrants and full access to social services including health and education.

Morocco has also led action at the continental and international level in favor of an orderly and solidarity-oriented migration policy while calling for international cooperation to tackle migration flows.

In the speech he delivered before that of the Pope in the Hassan mosque esplanade in front of some 10,000 people from across Morocco, King Mohammed VI raised the issue of migration. “Because God is love, I have tried to make sure my reign is characterized by closeness to citizens as well as by assistance to the poorest and most vulnerable people,” the king said.

He pointed that that is the spirit of the National Initiative for Human Development (INDH), launched 14 years ago…and that is also the philosophy behind the immigration and asylum policy which he instituted. This policy is fundamentally based on solidarity and it is in line with the Marrakech Compact, which the international community adopted on 10 December 2018, the Sovereign said.

Echoing him, the Pope praised Morocco for its advocacy of international cooperation to promote migrants’ rights, recalling the adoption in Marrakech of the Global Compact for safe, orderly and regular migration, which is intended to serve as a point of reference for the entire international community.

He, however, stressed that at an international context marked by the rise of anti-migration political trends there is a need for a change of attitude towards migrants, “one that sees them as persons, not numbers, and acknowledges their rights and dignity in daily life and in political decisions”.

“The issue of migration will never be resolved by raising barriers, fomenting fear of others or denying assistance to those who legitimately aspire to a better life for themselves and their families,” he said.

Pope Francis later on Saturday held a meeting with migrants at the diocesan Caritas center in Rabat, and discussed with them what he called “a great and deep wound that continues to afflict our world at the beginning of this twenty-first century. A wound that cries out to heaven”.
He stressed again the importance of the Global Compact on Migration as “an important step forward for the international community”, saying the Compact helps us see that “it is not just about migrants”, but about the face we want to give our society, and about the value of human life”.

Sub-Saharan migrants make the majority of the some 23,000 Catholics currently living in Morocco.