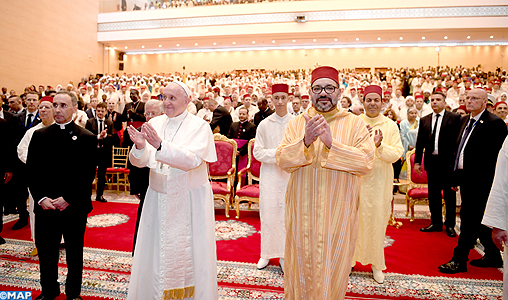 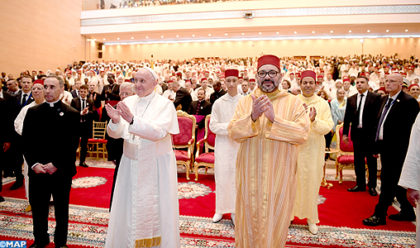 King Mohammed VI and Pope Francis held tête-à-tête talks Saturday afternoon at the Royal Palace, before they headed to the Rabat-based Mohammed VI Institute, a training center for Imams, Murshideen and Murshidat (male and female preachers), which champions a moderate and tolerant Islam against the threat of extremism.

The two leaders’ visit provided an opportunity to highlight the mission of this institution that teaches an Islam of moderation, peace and tolerance and that illustrates one of the aspects of the reform of the religious field in Morocco, spearheaded by the sovereign.

On this occasion, Minister of Habous and Islamic Affairs made a presentation highlighting the Kingdom’s tolerant Islam that is based on the Malikite rite.

He pointed out that the setting up of this imams’ training institute, at the initiative of King Mohammed VI, is part of his commitment to protect religion.

The Commander of the Faithful, he stressed, has since his accession to the throne made structural reforms and introduced a dynamic of concordance between the institutional frameworks of modern management and the goals of religion in their different aspects.

This distinction means that some of the major issues facing the management of Islam elsewhere find their solution in the context of the Commandment of the faithful, the minister of Islamic affairs said, underlining that there is no constraint in religion, which means the right to religious freedom.

Two students enrolled in the Institute among the dozens of national and foreign students who were present at the ceremony, made testimonies about their own experience as trainees in this institution.

Mrs Hindu Usman, a Nigerian, said she was confident that after her graduation and return to her country, she would be able to educate others about religion and its lofty values. She said she would devote her time and efforts to promoting awareness for peace and against violence in the name of religion, thanks to the experience and knowledge gained at the Mohammed VI Institute.

Aboubakr Hmaidouch, a French student, pointed out that the Muslim community in France is in great need of imams and preachers so that the values of religion contribute to living together and to spiritual well-being within the community.

He recalled that after the terrorist attacks that hit France in 2015, he felt the need to acquire knowledge and communication skills to be able to communicate within a society shaped by multiple trends and sometimes by stereotypes and assumptions.

He said he had acquired solid training and deep knowledge in traditional religious sciences and modern humanities at the Mohammed VI Institute.

The two leaders’ visit was marked by a performance by the Moroccan Philharmonic Orchestra of Muslim, Christian and Hebrew religious songs.

The Institute, opened in 2015, is housing 1,200 live-in students from Morocco, sub-Saharan Africa, the Middle East and Europe.