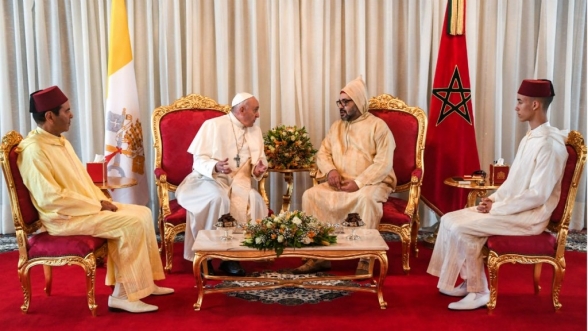 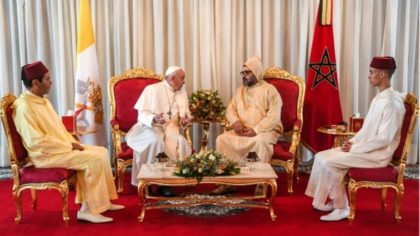 Pope Francis started this Saturday a two-day visit to Morocco, a Muslim country wherein Muslims, Jews and Christians live in peace and harmony in a region threatened by growing extremism, populism and radicalism.

Shortly after the Pope’s arrival in Rabat airport Saturday noon, King Mohammed VI, the Commander of the Faithful, accompanied by Crown Prince Moulay El Hassan, and Prince Moulay Rachid, presided over at the esplanade of the Hassan Mosque in Rabat , the official welcoming ceremony of Pope Francis.

The Sovereign and the leader of the Catholic Church then delivered speeches in the presence of tens of thousands of people of all faiths.

The spiritual leader of the Catholic world is making this historical trip at the invitation of King Mohammed VI, Commander of the Faithfull, to promote interreligious dialogue, mutual respect and understanding between the followers of the two religions.

Francis will be the second pope to visit the country, after St. Pope John Paul II was in 1985 the first pope to visit a Muslim country at the invitation of late King Hassan II.

The North African Kingdom stands out as a model in the protection of religious minorities and as a caretaker of historical heritage, rich in tolerance and coexistence, while respecting the rights of those who fled religious oppression or social injustice.

Moroccan laws and authorities do not tolerate the violation of the rights of religious minorities. Muslims believe in all Prophets and Messengers and were ordered to honor and respect them.

Throughout its history, Morocco has set the example of cultural coexistence and interaction between Islam and other religions, particularly Judaism and Christianity. The Moroccan-Andalusian civilization, produced by various communities with diverse religious and cultural backgrounds, led to the development of trade, industry and arts, as well as to fruitful exchange in the areas of knowledge, wisdom, philosophy and science.

There are about 23,000 Catholics in the country which has two archdioceses; one in Rabat, the country’s capital city, and one based in Tangiers.

Reverend Karen Smith, the president of the Protestant Church in Morocco commended the liberty that she and her foreign congregations enjoy in the North African country.

In a video message to Moroccans released on the eve of his trip, Pope Francis said: “as Christians and Muslims, we believe in God the creator and merciful one, who has created men and women and placed them on earth so that they might live together as brothers and sisters, respecting each other’s diversity and helping each other in their need”.

During his trip, the Holy Father will visit to the tombs of late Kings Mohammad V and Hassan II and meet with migrants at the offices of the local branch of aid agency Caritas as the Catholic Church in Morocco works mainly with people from Sub-Saharan Africa, who make up to 70 percent of churchgoers.

The Pope will also visit a training center for Imams, Murshideen and Murshidat (male and female preachers), championing a moderate and tolerant Islam against the threat of extremism. The center, opened in 2015, is housing 1,200 live-in students from Morocco, sub-Saharan Africa, the Middle East and Europe.

On Sunday, 31 March, Pope Francis will make a private visit to a rural center for social services in the town of Témara, and later will meet with priests, religious women and men, and members of the ecumenical council of churches.

The Pope will then have lunch with the Bishops of Morocco. The visit will conclude with the celebration of a solemn papal Mass on Sunday evening at the Prince Moulay Abdellah sporting complex in Rabat. The Mass will be aired worldwide.

North Africa Post's news desk is composed of journalists and editors, who are constantly working to provide new and accurate stories to NAP readers.
NEWER POSTInter-religious dialogue is not enough, Knowing one another will help rise up to the challenge of radicalism – King Mohammed VI
OLDER POSTKing Mohammed VI, Pope Francis join forces to promote inter-religious dialogue