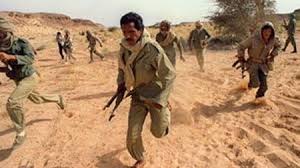 After the many diplomatic setbacks it suffered abroad, the Algeria-backed Polisario separatist front is currently facing a growing internal dissent.

Last week, precisely on March 18, a young officer, who claimed to be deputy commandant of a “Katiba” (battalion) of the so-called Gendarmerie of the Polisario, surrendered to the Royal Armed Forces (FAR) at Farcia in the Oued Draa region, and expressed his wish to rally his motherland, Morocco.

This Tuesday, a group of 12 separatist activists showed up at the Sahara defense wall on the side of Mahbess and approached a unit of the FAR, chanting cheers for King Mohammed VI, reported the news website le360, quoting reliable sources.
The twelve “repentant” separatists were allowed access to the national territory where they are being cared for in line with the usual procedures, the website said.

Parallel to the general situation of unrest in Algeria, with the continuous demonstrations against Bouteflika and his clan, a climate of uncertainty is prevailing in the Tindouf camps too.
The revenant of last week had said there are still other repentant separatists who want to return to their country.

Over the years, many senior executives of the Polisario have returned to their native land after they realized that the separatist front is fooling them with independence dreams that will never come true.