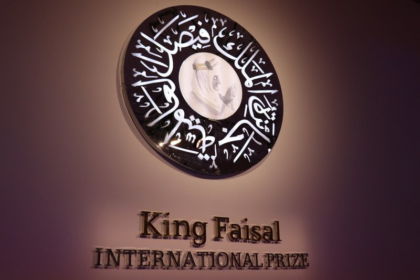 Dr. Oudghiri, who shared the $200,000 award with Egyptian Prof. Mahmoud Fahmy Hegazi, won the prize for his advanced studies on Arab language and his efforts to promote this language to counter dialects and foreign languages in universities.

Dr. Oudghiri was born in 1944 in the city of Fez. He completed his postgraduate studies at the University of Mohammed Ben Abdallah in Fez, the Sorbonne University in Paris and the Mohammed V University in Rabat. He received his master’s degree in linguistics in 1976 and then a Ph.D. in linguistics. He is a member of the Board of Trustees of the Islamic University of Niger, Secretary General of Moroccan Linguistic Union.

Dr. Oudghiri published research and specialized language studies in Morocco and the Arab world. He is also the author of many literary and linguistic books. He has several poetry collections and won Moroccan Book Award three times: (1977 – 1989 – 2014).

Its aim is to benefit Muslims in their present and future, inspire them to participate in all aspects of civilization, as well as enrich human knowledge and develop mankind. KFP winners are evaluated only based on merit and their works are meticulously examined by specialized selection committees.