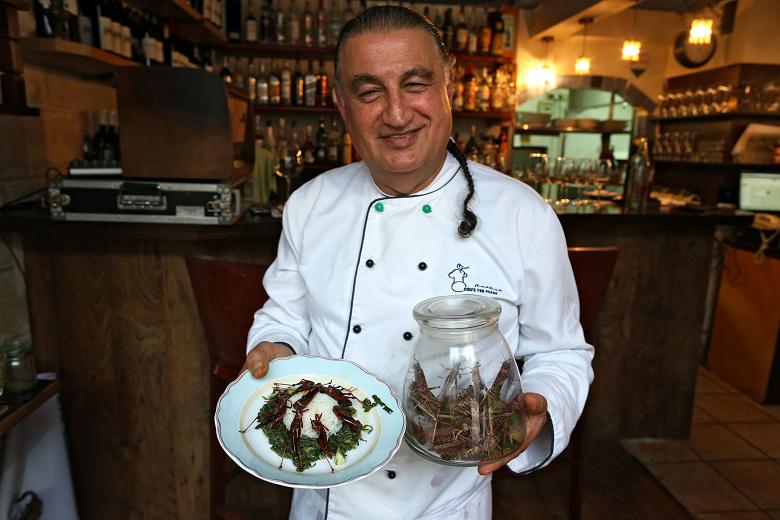 Israel: One man’s Loss can be Another’s Gain

Locust invasions are generally decried as plagues that devastate crops and impoverish farmers. The view is not shared by all. On Tuesday, when millions of locusts, wind-driven from the Egyptian Sinai, landed in Kadesh Barnea, the historical spot where Jews are said to have settled when they fled from Egypt in the biblical era, all Israelis in the region expressed worries, but not Moshe Basson.
For Moshe Basson, it was a godsend and for good reason. This renowned cook, specializing in Biblical-era food, was actually delighted to have an unusual ingredient to diversify the menu of his kosher restaurant and to propose to his customers grilled locusts for dessert as he did few years ago.
Although Jewish Rabbis do not agree whether the locusts are Kosher or not, Chief Basson promotes locust eating that taste, according to him, like sunflower seeds or baby shrimp.
He told an Israeli TV channel that demand is high for his $15 locust dish and that many religious customers want to purchase the insects and cook them at home.
On Wednesday, he said, he received several deliveries of live locusts from neighboring cities and to encourage his initiative even the mayor of Negev town that has been invaded by the insects came in to Basson’s restaurant to personally deliver a bag of locusts.
While some are heading to the restaurant to enjoy a locust-based meal, while rabbis are arguing whether the insect is Kosher or not, the Israeli government acted without wasting time and sprayed pesticides all over Negev to bring the infestation under control. Will these pesticides sprayed insects also end up in customers’ dishes? It is up to chief Basson to give an answer.
CATEGORIES Eating outLifestyle
Share This