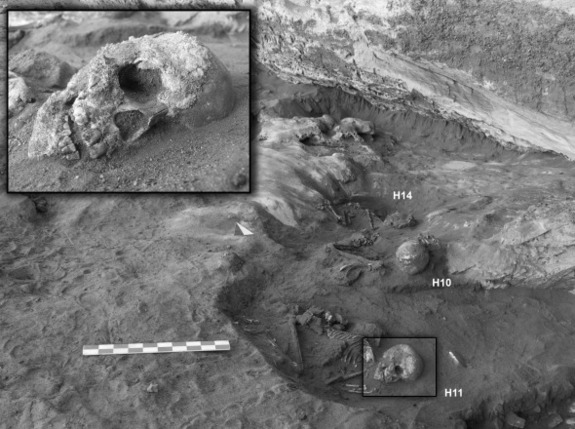 Skeletons dating back to between 8,000 and 4,200 years have been discovered by archaeologists in Libya’s Sahara desert. The team discovered 20 Stone Age skeletons in and around a rock shelter which is believed to have been a local cemetery.
About 15 women and children were found buried in the rock shelter, while 5 men and juveniles were discovered under giant stone heaps outside the shelter. These may have been buried at a later period when the region turned into a desert. It’s assumed that their culture and traditions adapted to the climate change. Studies concluded that the Sahara desert region of Wadi Takarkori used to have a scrubby vegetation with seasonal green patches about 6,000 to 8,000 years ago.
Archaeologist Mary Anne Tafuri of Cambridge University said the site “must have been a place of memory” where generations have been buried. The burial ground is divided between the two sexes which seemingly means that the society was based on gender. Marina Gallinaro, a researcher in African studies at Sapienza University of Rome who is not part of the team, claimed that it could mean that women had a more prominent role in the society before the transformation of the region into a desert.
The Wadi Takarkori region where the discovery was made is already being described as an “untapped treasure” with hundreds of sites awaiting excavation. Tafuri and her colleague Savino di Lernia began excavating the archaeological site between 2003 and 2006.  Other archaeologists have also uncovered huts, animal bones and pots with traces of the earliest fermented dairy products in Africa.
The new discovery also highlights the need to protect the fragile region, which has been closed to archaeologists since the uprising against Ghadafi began. Wadi Takarkori is very close to the main road to Niger.
CATEGORIES FeaturesHeadlinesLibya
Share This