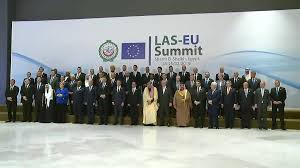 The First summit between the League of Arab States and the European Union held in Sharm el Sheikh, Egypt, February 24-25, has reiterated the two sides’ commitment to reaching a two-state solution, and to achieve a just, lasting and comprehensive peace between Israelis and Palestinians.

In a declaration adopted by the summit Monday, the two sides reaffirmed their common positions on the Middle East Peace Process, saying they reiterated their “commitment to reaching a two-state solution on the basis of all relevant UN resolutions, as the only realistic way to end the occupation that began in 1967, including of East Jerusalem, and to achieve a just, lasting and comprehensive peace between Israelis and Palestinians through direct negotiations between the parties that addresses all final status issues.”

They also reaffirmed their common positions on the status of Jerusalem, and on the illegality under international law of Israeli settlements in the occupied Palestinian territories.

“We recalled the importance of upholding the historic status quo for the holy sites in Jerusalem, including with regard to the Custodianship of the Hashemite Kingdom of Jordan,” the Declaration states.

“We reaffirmed the indispensable role of UNRWA and the need to support it politically and financially in order to allow it to continue fulfilling its UN mandate,” the text reads.

“We expressed our concern about the humanitarian, political, security and economic situation in the Gaza Strip, and called for all parties to take immediate steps to produce a fundamental change to the better in full respect of international law, including human rights and humanitarian law, especially with respect to the protection of civilians.”

The Declaration points out that participants had “constructive, serious and thorough discussions on recent developments in Syria, Libya and Yemen, and on ways to make progress towards reconciliation and sustainable and peaceful political solutions, in line with relevant UN resolutions. “We affirmed the need to preserve the unity, sovereignty, territorial integrity and independence of these countries. We reaffirmed our commitment to the UN-led processes and our full support to the UN Special Envoys for Syria and Yemen and to the UN Special Representative for Libya,” the text states.

The summit, which debated a number of common challenges, including the phenomenon of migration, vowed in this connection to protect and support refugees in accordance with international law and international human rights principles, and to condemn all forms of incitement to hatred, xenophobia and intolerance. It also pledged to strengthen the fight against irregular migration and to scale up joint efforts in preventing and fighting migrants’ smuggling, eradicating trafficking in human beings and combating those who exploit vulnerable people.

To this end, Arab and European countries agreed in particular to further enhance cooperation and coordination aimed at addressing the root causes of terrorism, and stressed the need to continue efforts to combat the movement of foreign terrorist fighters across their borders. They affirmed that successfully combating these challenges requires a comprehensive approach including, inter alia, cutting-off all methods of support to those terrorists including financial, political, logistical and military support.

They agreed to hold the Arab League-EU Summits regularly, alternating between Arab and European states. The next summit will take place in Brussels in 2022.