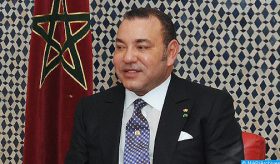 King Mohammed VI has stressed the importance of the 1st ever Arab-European summit, which opened Sunday in Sharm El Sheikh (Egypt), at a juncture marked by crucial geostrategic developments with a direct bearing on the two regions.

In a message addressed to the summiteers, the Moroccan King said the event marks a pivotal moment in the Arab-European dialogue and history. “It reflects a common desire to take our relationship to a higher level. That would certainly have a tangible impact on security and stability in our regions”, said the Sovereign in his message that was read out by Head of Govt Saad Eddine El Otmani.

The summit would also open up promising prospects for peaceful coexistence between our peoples and contribute to the economic and social well-being they yearn for, added the Monarch, noting that the event sets the stage for a dialogue, which has special significance as far as the Arab world’s relationship with its various partners.

This relationship reflects a common conviction and is the result of human, intellectual and cultural efforts rooted in constant interaction and mutual enrichment between Arab and European civilizations, said King Mohammed VI, underlining the special and fruitful relationship Morocco has for decades with its European partner, especially through its Advanced Status with the EU.

“My country looks forward to even closer relations with the EU based on partnership. Morocco is indeed ready to help turn Arab-European cooperation into an innovative partnership that builds upon the cultural heritage of each party, making Arab-European interaction a lever for the emergence of a solid, balanced relationship rooted in shared values, common interests, mutual esteem and constructive dialogue”, said the King.

This summit is an opportunity (…) to turn Euro-Arab dialogue into genuine cooperation based on a clear vision and realistic action plans serving common interests, underlined the Monarch, calling for a cool-headed assessment of the Euro-Arab cooperation in a bid to determine its strategic short and long-term priorities, and develop work methods to deliver better results.

He also called for an integrated holistic vision of the Euro-Arab future, saying that such an endeavor calls for a rational classification of priorities, the definition of realistic objectives, the adoption of a proactive, participatory approach and the use of sophisticated, flexible work mechanisms.

To achieve these goals, the Moroccan King stressed the need to ensure Arab national security, and to respect the principles of neighborliness, national sovereignty, and territorial integrity of states, urging Europe to help its Arab neighbors to achieve economic, scientific and technological development that helps reduce economic and social divides between partners.

This can be done through tangible development projects that re-fashion the movement of investment and people and help bring about more balanced production systems that take into account common security, economic and social concerns, explained the Monarch.

King Mohammed VI also said that future partnerships should pave the way for the emergence of a sound intellectual, cultural and information environment, conducive to coexistence between the peoples of the two regions and allowing for the integration of generations and the promotion of the values of tolerance and acceptance.

The Sovereign seized this opportunity to call on regional Arab groupings – including the Arab Maghreb Union – to play their part in boosting relations with European partners and to overcome political obstacles and bilateral disagreements, which hinder the achievement of progress and development.

The Sharm El Sheikh summit aims to enhance cooperation ties between Arab countries and the EU and to address a wide range of shared strategic priorities and common challenges, such as multilateralism, trade and investment, migration, security, and climate change.

The summit also provides an opportunity to discuss the latest developments in the region, such as the Middle East Peace Process and the situation in Yemen, in Libya and in Syria.