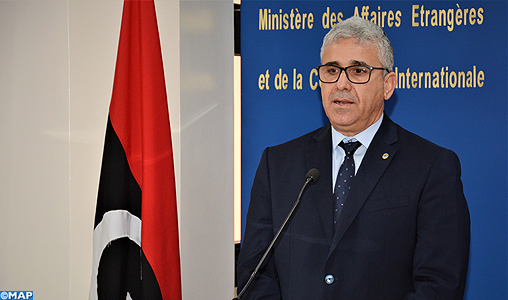 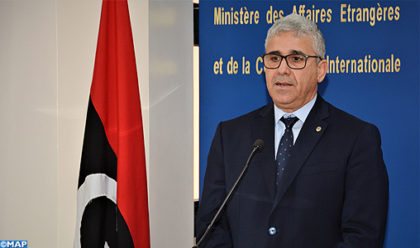 Libyan interior minister Fathi Bashagha commended on Monday Morocco’s contributions to his country’s stability, stressing the importance of the UN-brokered agreement inked by Libya’s warring factions in the Moroccan coastal town of Skhirat in 2015.

This agreement remains the ideal framework to achieve national reconciliation, he said at a press briefing held in Rabat following talks with Morocco’s minister of foreign affairs Nasser Bourita.

“Morocco has always stood on the side of Libyans in a neutral manner and has provided them great support by hosting the Skhirat talks that led to the signing of the Skhirat Agreement”, he added, affirming that the resolution of the Libyan crisis requires reconciliation not weapons.
His talks with Moroccan top diplomat covered security issues, the fight against organized crime, terrorism and illegal emigration.

For his part, Bourita reaffirmed Rabat’s support to the efforts aimed at restoring stability in Libya, saying Morocco stands by the Libyans to find a Libyan solution to their problems on the basis of the Skhirat agreement.

The Moroccan minister also said that Libya needs stability and strong security institutions to address the spread of armed and terrorist groups in some parts of the country.

Since the NATO-backed revolution ousted Gaddafi in 2011, Libya remains in turmoil, battered by infighting between heavily armed militias. The political crisis has divided the country wherein the Tripoli-based Government of National Accord (GNA) is challenged by a rival administration in the east, backed by military strongman Khalifa Haftar, head of self-imposed Libyan National Army (LNA).

The internationally recognized GNA, led by Prime Minister Fayez al-Sarraj, has failed to assert its authority across the oil-rich country, which is also grappling with deadly attacks and a migration crisis.

But the two contenders are not the only players in the Libyan chaos. There are various clans that have armed groups in their areas of influence.

In this connection, the UN envoy to Libya Ghassan Salame arrived Monday in Benghazi to conduct a number of meetings with officials from the eastern region, according to the UNSMIL press office.

The UN envoy has reportedly discussed with Khalifa Hafter, at a meeting held Monday at Hafter’s HQ, al-Rajmah, the latest developments in the political process and the security situation in the south.

Salame emphasized during the meeting the importance of narrowing the divergences in views between the Libyan factions and his efforts to bring about a successful outcome of the UN-backed National Conference, in order to hold elections immediately after the completion of the constitutional entitlements, according to media sources.