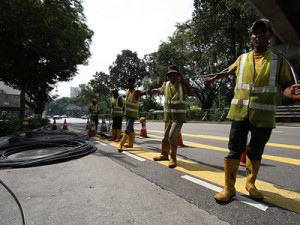 Algeria will be having nationwide coverage of fiber optic by 2015 according to the minister of Post and Information Technology and Communication, Moussa Benhamadi. He made this announcement at Tiaret precising that the project is aimed at generalizing and connecting all municipalities and agglomerations where the population is more than 9000.
The minister stated that Tiaret is an example of the major deficiency in the need for optical network because out of the 42 districts, only 17 are connected with an average of a little over a thousand people having access to fiber optic connection. He added that the ministry will strengthen the national network of optical fibers by a process of expansion, improvement and security to provide quality services. He deplored the number fixed phone subscribers in the region and called on Algeria Telecom to work towards increasing it.
Benhamadi also announced that six towns will be connected to fiber optic network this year of the 25 programmed while the province will benefit from 7,000 new lines before the end of March to service MSAN.
Regarding “Cyber-rif” service, he announced that the generalization of the service after previously being launched as pilot operation. The service will be enabled by an internet enabled bus connected to a satellite and will be launched in the ‘walis’ after a financial arrangement between the ministry and the province.
Benhamadi assured that his ministry will work towards generalizing internet in all the six university hostels of the province. He also said that there are plans to build another hostel and the introduction of postal services will soon be available in university hostels nationwide.
To round up his visit for the day, he went on a guided tour of youth centers and inspected communication agencies operating in the area.