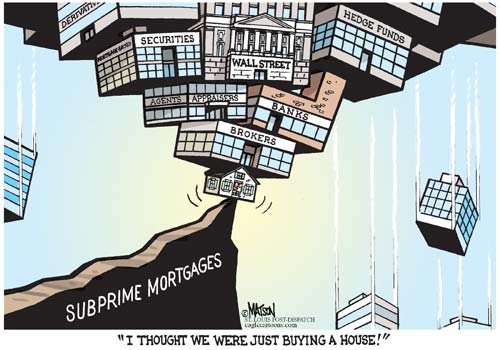 Subprime Entailed Dismissals or the Chronology of a Crisis

The drop of benefits prompted banks, fast earning mongers, to proceed to a wave of dismissals. In 2011, Barclays already split up with more than 4,400 employees, Crédit Suisse planned to expel 2,000 persons and Lloyds Banking Group, 10,000.

The massive suppression of jobs is a trend that has affected the financial world for many years. Decisions leave nothing to chance, it is a backlash effect.
To understand the actual banking situation, it is necessary to go back to the United States where all started and to the subprime crisis.
In 2006, after years of real estate boom, the market started to collapse and the mortgage bubble burst. Loans packed and sold on the international market could not be reimbursed. American banks couldn’t face their obligations and entered in a liquidity crisis.
The international market was immersed in insolvent banking investments, while the American government was witnessing, helpless, the birth of a chain reaction. The situation quickly extended to Europe, and then to the rest of the world. Institutions like Lehman Brothers or Citigroup have to file for bankruptcy or be put for sale.
To face up the crisis, banks were forced to proceed to budgetary cuts. As the easiest way is to relieve wage pressures, a second wave of dismissals followed.
Numerous banks, such as the Deutsche Bank, closed their investment poles, suppressing thus thousands of jobs. The dismissal tides were so recurrent in the banking milieu, that a new word became commonly used to designate the employees spared by the purge, “the survivors.”
The 2007 – 2011 financial crisis plunged many economies in stagnation or recession. Households consume less and entrepreneurial investments are reduced. As lending conditions are getting stricter, banks’ lending is decreasing and so are their benefits. With the banks reaping less benefits, dismissals continue rising.
The French-Belgian Dexia dismissed a third wave of employees. Bank of America, strongly mangled these past years, could soon reduce its 30,000 strong staff.
In France, employees of the Bank of France staged strikes to counter the redundancy plan threatening 2,500 persons.
In Switzerland, Italy, Belgium, and elsewhere, the banking milieu is facing up drastic restructuring.
The financial activities decline and the ensuing unemployment rise, combined to the public debt, have a negative impact on the GDP (Gross Domestic Product) and the growth rate of concerned countries.
It is the story of the snake that bites its own tail. Banks are reaping the after-effect results of the crisis and recession they had themselves triggered.
According to press reports, benefits of both the HSBC bank and the French-US Lazard institution have dropped by half in 2012, while Société Générale recorded a recoil of 67,5 percent.
The dismissal hemorrhage in the banking sector is expected to continue in 2013 sending thousands of employees on the dole.
In view of the situation, prospects are very dark for new graduates, who will surely find it very hard a get a position in the world of finance.