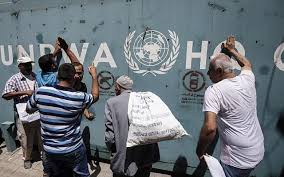 The Italian government has donated €1.5 million ($1.7 million) to the United Nations Relief and Works Agency for Palestinian Refugees (UNRWA) to provide health services for Palestinian refugees in Lebanon while Russia has pledged $10 million.

UNRWA has been raising money to support refugees in Palestinian territories after the U.S., known as the largest contributor for the agency, slashed last year its $300-million sponsorship to $60 million, as a condition to force Palestinians to accept the White House’s new policy in the Israel-Palestine crisis including the declaration of Jerusalem as capital of Israel.

Italian Ambassador to Lebanon, Massimo Marotti, and UNRWA Director, Claudio Cordoni inked the transaction. The $1.7 million will be earmarked for medical service supply and financial support to around 1,500 Palestinian refugees moving from Syria to Lebanon, Ma’an News reports.

Italy provided the relief agency around 3.75 million in 2017-2018.
In a separate report, Russia Tuesday pledged to allocate $10 million to the UN agency as it promised financial and political support for Palestinians, Anadolu Agency reports.

The pledge was made by Konstantin Kosachev, who heads the Foreign Affairs Committee of the Russian Federation Council at a meeting in Moscow with Pierre Krahenbuhl, head of the UNRWA.