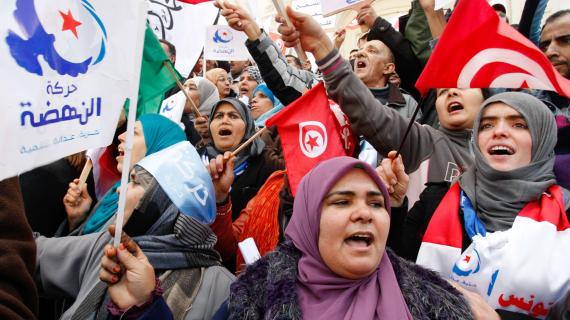 Tunisian Ennahda Party: Power, Power when you Hold US… 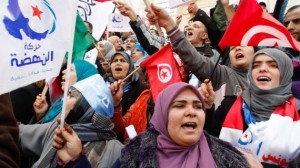 Tunisian Prime Minister Hamadi Jebali announced on Monday that his proposal to form a technocrat cabinet to bring the country out of the deadlock has fallen short.
Following the second round of negotiations with some 15 political parties on his initiative to form an apolitical cabinet of technocrats, Jebali was quoted by Tunisia’s official news agency as saying that his consultations “have failed to reach consensus.”
He said however that progress has been made and that “the way is still open to all parties to reach a compromise on the line-up of the next government.” “Another form of government” is still a possibility, said the Prime Minister who is scheduled to meet this Tuesday with the Tunisian President for consultation on other possible solutions.
The fifteen parties that participated in Monday negotiations said they were ready to back a joint government made up of apolitical and political members. Observers consider however that the schism is still too deep and that the road is still too long to make any noticeable progress as the main opposition parties and the secular parties participating in the Ennahda-led government want to give executive portfolios to independents while the Ennahda is against the idea.
The Prime Minister did not blame any party for the failure of the consultations, but all analysts hold his own ruling Islamist party, Ennahda, responsible for the deadlock.
Ennahda has actually rejected the formations of a government of technocrats as soon as the idea was floated following the assassination on February 6 of Chokri Belaid, an outstanding opposition figure who was known for his harsh criticism of the Islamists.
The assassination was followed by huge demonstrations and counter-demonstrations by the opposition and the Ennahda supporters that sometimes ended in bloody clashes with riot police and engulfed the country in a political crisis.
To defuse the tension and appease the people’s anger, Jebali proposed to form a government of technocrats that would create appropriate conditions for organizing the elections, help the National Constituent Assembly come out of the deadlock on drafting the Constitution, try to re-boost the economy and meet the people’s major aspirations. As the negotiations started on February 15 seemed stumbling from the start, Jebali threatened to resign if he fails in his endeavors to form a technocratic government.
But his party, led by Rached Ghannouchi, rejected the initiative and reaffirmed its resolve to stay at the helm of power.
“Ennahda… will never give up power,” Ghannouchi said during a rally of his party’s supporters held in Tunis over the weekend to express opposition to the Prime Minister’s proposal. He underscored that the party has the confidence of the people and the legitimacy of the October 23, 2011 ballots.
On Monday, Ennahda’s Shura Council renewed, in a press release, its rejection of Jebali’s proposal and its backing to a political cabinet that reflects the will of the people, alluding to the 2011 elections.
While Ennahda party keeps telling the world that it loves power and will not let it go, Tunisians may paraphrase Jean de la Fontaine who said “Love, love, when you hold us, One can say well: Good-bye prudence,” and say “Power, Power, when you hold us, One can say well: Good-bye national interest.”
CATEGORIES FeaturesHeadlinesTunisia
Share This