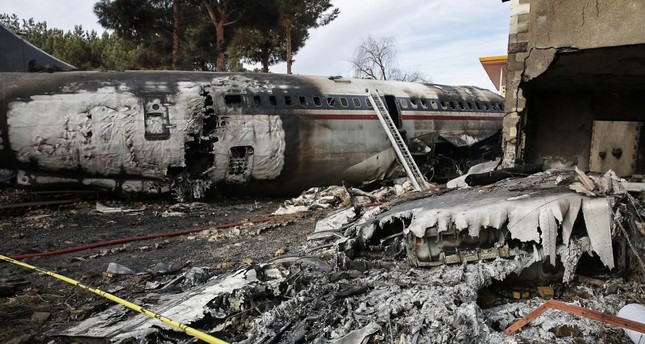 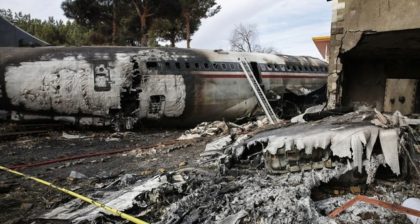 An Iranian cargo, Boeing 707 carrying from Kyrgyzstan crashed on Monday after skidding off on the runway at an airfield during an emergency landing near capital, Teheran, leaving 15 people dead except one crew member, reports say.
The narrow body jet dating back to 1979 crashed into residential area after making an emergency landing at 8:30 am, at Fath Airport operated the Iran’s powerful Revolutionary Guards. The four-engine aircraft ended up in a residential area. Images of the state-run television showed the wreckage of the jet and some homes completely destroyed. The landing was to take place at the nearby Payam International Airport, about 40 kilometers (25 miles) west of Tehran.
The aircraft, the Associated Press (AP) reports bore the paint scheme of the Iranian air force’s Saha civilian airline.
There were 16 people as on the aircraft which was carrying meat from Kyrgyzstan which has been since 2916 a key meat supply for Iran. Iran’s meat imports from Kyrgyzstan hit 150 tons in 2016 and 350 tons in 2017.
In a similar development, a commercial airline in November nearly suffered same faith at Fath Airport but managed to avoid a crash after mistaking the airfield for Payam International Airport, AP notes.
The Monday accident underlines Iran’s challenges to renew its aging aircraft fleet which most in majority acquired during the rule of Shah Mohammad Reza Pahlavi and before the 1979 Islamic Revolution.
Airbus and Boeing have scrapped deals and suspended talks with Teheran to sell over 100 jets after US President Donald Trump imposed new sanctions in August and November as he in May tore the 2015 multinational nuclear accord between Iran and world powers.