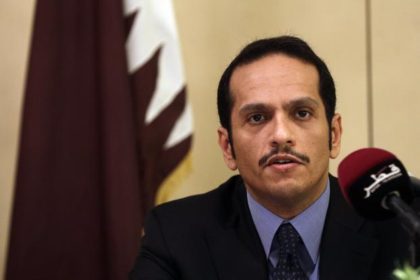 Qatar mother said it will oppose efforts by large members of the Arab League to reinstate Syria noting also that it will not reopen its diplomatic mission in the Syrian capital Damascus contrary to some leading Arab countries, reports say.
“Since day one Qatar had reasons for which it supported suspending (Arab League) membership and those reasons are still there, so we do not see any encouraging factor,” said Qatar foreign minister, Sheikh Mohammed bin Abdulrahman Al Thani.
The Qatari top diplomat also stressed that Gulf country will not resume diplomatic relations with the regime of President Bashar al-Assad.
The Arab League in 2011 expelled Syria out of the Pan-Arab organization over regime’s crackdown on demonstrators. The league also supported rebels opposed to the regime until recently.
Relations between Syria and the several Gulf countries have improved since last month with the UAE and Bahrain reopened their embassies in a move of reconciliation.
Kuwait also early this month say it was keen to send back diplomatic staff at its embassy in Damascus with the Arab League gives the greenlight. The organization will convene in Tunisia in March but the issue on the Syrian membership would not be discussed according to the organization’s assistant Secretary General, Hossam Zaki.
The League has no plans to discuss invitation to the body’s summit in Tunisia during the upcoming meeting in Lebanon to which Damascus is not invited either,”Zaki told Russian state-run news agency Sputnik on Saturday.