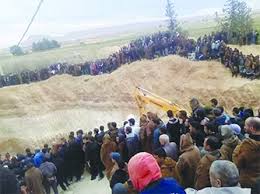 The majority of Algerians feel disgusted, abandoned and outraged after a 31-year-old man was left to die in a well in the southeast of Algeria, Africa’s biggest military spender and member of the OPEC cartel.

Ayache Mahjoubi fell accidently in a well in M’Sila Province and remained stuck there for six days as the poorly equipped rescuers were unable to extract him while he was alive due to negligence and gross incompetence.

His death sparked on Tuesday widespread protests in the country, which is on the verge of implosion due to deepening political crisis and growing social woes. The oil & gas-rich country spends billions of petrodollars on weapons import rather on the purchase of life-saving equipment for its rescuers, hospitals, schools… or on job creating projects.

Videos posted on social media showed hundreds of people demanding the resignation of the local officials and chanting slogans in support of Mahjoubi.

The protesters condemned the Algerian authorities for the delay and failure to rescue the young man from poor background. His tragic death shocked Algerians who feel “Hogra”, or contempt from Govt officials who look down on ordinary people.

Mahjoubi’s case is in many ways reminiscent of Mohamed Bouazizi, the young greengrocer in the small Tunisian town of Sidi Bouzid, who burned himself in protest after police had confiscated his goods. This act is generally seen as the trigger of the Tunisian revolution, which sparked the 2011 protests in the Arab world and brought down several authoritarian regimes.

According to an Op-ed published lately by the Financial Times, the Algeria people already feel “Hogra” by the prospect of keeping ailing president Abdelaziz Bouteflika, 81, for a fifth term despite uncertainties over his heath.

Mr. Bouteflika, in power since 1999, has rarely appeared in public since suffering a stroke five years ago. His absence has led to speculation over who is really in charge in Algeria.

“There is no doubt that there is an underlying volcano,” wrote FT, warning that the volcano could eventually erupt anytime, as there are great numbers of unemployed young people living in despair.