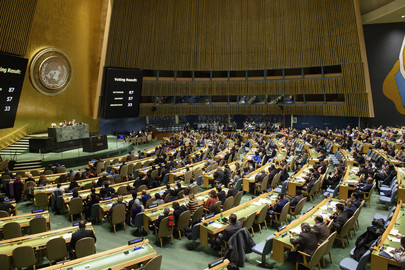 The United Nations General Assembly adopted without a vote the resolution approved by the UN 4th Committee last October, reiterating support for the political process to settle the Sahara issue under the exclusive auspices of the United Nations.

The resolution supports the political process based on Security Council resolutions adopted since 2007, with a view to achieving a “just, lasting and mutually acceptable political solution” to this regional dispute, while commending the efforts of the Secretary-General and his Personal Envoy in this regard.

The text stresses that the solution to this dispute must be based on the efforts made and the new developments that occurred since 2007, with the aim of implementing Security Council resolutions, a clear allusion to the Morocco-proposed autonomy initiative and a signal that all plans prior to this date are obsolete and unfeasible.

The resolution supports the Security Council resolutions adopted since 2007 as these texts have recognized the preeminence of the autonomy initiative that was welcomed by the United Nations Executive Body and the international community as a serious and credible initiative for the final settlement of this regional dispute.

The resolution also supports the recommendations of Security Council Resolution 2414 adopted in April 2018. This resolution calls for progress in the search for a realistic, pragmatic and sustainable political solution to the Moroccan Sahara issue, based on compromise.

The adoption of the resolution by the General Assembly comes one day after the end of the Geneva Round Table held Dec. 5-6 with the participation, for the first time, of Algeria as a major stakeholder in the Sahara issue, in accordance with Security Council Resolution 2440 adopted last October.