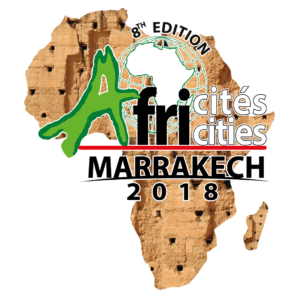 Participants in the 8th Africities Summit, held in Marrakesh, November 21 through 24, expressed their firm commitment to back the various development agendas seeking to establish security, prosperity and peace in Africa and emphasized that the transition to sustainable cities and territories “is not an option, but a pressing need”.

In a final declaration, participants in the United Cities and Local Governments of Africa’s flagship pan-African event pledged to support the implementation of continental and global development agendas for a prosperous and peaceful Africa.

They mentioned in this vein the AU Agenda 2063, underpinned by the vision of “an integrated, prosperous and peaceful Africa”, providing a strategic framework for the socio-economic transformation of the continent over the next 50 years.
They also vowed to back the main priorities of the African Development Bank (AfDB) and the Sustainable Development Goals (SDG 2030), including poverty eradication and the promotion of inclusive growth and well-being.

The document underscored the importance of the implementation of the New Urban Agenda 2036, which recognizes the need to provide local and regional authorities with the necessary resources and capacities to enable them to fulfill their role in achieving the SDGs, notably via greater capacity for land and finance management, taxation and planning, as well as direct access to international funding and loans for climate change mitigation-related activities.

Participants committed to share a common aspiration to transform African cities and territories into places where every citizen will live comfortably, peacefully and safely and to strengthen the network of locally elected African female members at the regional and national levels, while emphasizing that the transition to sustainable cities and territories “is not an option, but a pressing need”.

In a call addressed to governments, they emphasized the need to promote devolution to ensure good governance and help cities and territories conduct their mandate by providing the necessary financial and human resources. Similarly, they called for enacting laws promoting participatory and gender-responsive local governance through gender mainstreaming in local planning and budgeting.

In addition, representatives of African local governments and their partners expressed their support for the Paris Agreement on Climate Change, Africa being most affected by warming.

The Africities summit highlighted by the official launch from Marrakech of the pan-African campaign for “African Cities without Street Children” by Princess Lalla Meryem, chairwoman of the Moroccan National Observatory for Children’s Rights (ONDE).

In a message addressed on this occasion, King Mohammed VI of Morocco urged African cities, urban communities and all local officials to fight the phenomenon of street children and to put child-related issues at the heart of decentralization policies.

The pan-African gathering that was marked by the signing of several cooperation agreements between cities and NGOs awarded the Moroccan city of Chefchaouen the “Climate Initiatives 2018 African communities” Trophy in the category of the best intermediate city in Africa.

Africities Summit is held every three years in one of the five regions of Africa. It gathers communities and local authorities in African countries, as well as financial institutions, civil society groups and development partners at continental and international level.

The 9th edition of the International Summit of Cities and Local Governments of Africa (Africities) will be held in 2021 in Kisumu, Kenya.

The 2018 summit, held under the theme “The Transition to Sustainable Cities and Territories, The Role of Local and Sub-National Governments of Africa”, focused on the need for Local Africa to learn, promote and present a new approach to sustainable development.

The pan-African event in Marrakesh was attended by a record number of nearly 7,000 Participants, including representatives of some 16,500 local communities in Africa.