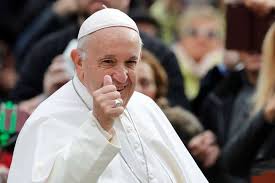 Pope Francis will visit Morocco on March 30 and 31 within the frame of the planned foreign trips of the 81-year-old pontiff in 2019.

The Vatican confirmed on Tuesday the Pope’s travel to the North African Kingdom, saying he will visit the cities of Rabat and Casablanca.

The Pope will visit the cities of Casablanca and Rabat, home of the Apostolic Nunciature since 1976, the director of the Vatican Press Office, Greg Burke, announced in a communiqué, relayed by Italian paper La Stampa.

He explained that the visit takes place in response to an invitation extended by King Mohammed VI, “a sovereign respected at a global level by Muslim leaders and other religions for his positions open to dialogue”.

Talks between King Mohammed VI and his guest will tackle several issues, with focus on inter-religious dialogue and emigration.

Pope Francis has often cited as an example the moderate Islam advocated by King Mohammed VI.

Actually, the Moroccan Sovereign has repeatedly pleaded for dialogue between religions, tolerance and mutual respect between individuals and peoples.

Pope Francis will be the second pope to travel to Morocco. John Paul II visited the country in 1985, a visit that was seen as an opportunity to build bridges between Muslims and Christians.

Morocco, a cradle of intercultural and inter-religious dialogue, hosted last May an event under the theme “Believers and citizens in a changing world”.

The event, initiated by the Academy of the Kingdom of Morocco, was attended by scholars from Moroccan, Islamic and Pontifical Universities who discussed means of sealing dialogue between Christians and Muslims. They stressed in the final declaration that this dialogue shall be continued “with patience and wisdom, because it is not optional, but it is a necessity for peace, security and the well-being of societies”.

On the sidelines of the event, the Holy See and Rabita Mohammedia, a Moroccan organization of theologians, signed an agreement providing for holding biennial meetings on topics to be set by the two sides.

The Pope’s trip in March 2019 will therefore be a new opportunity to strengthen this already initiated dialogue between the Catholic Church and Islam.

Less than one percent of Morocco’s population is Christian.

Pope Francis has already visited several Muslim countries, including Turkey in 2014, Azerbaijan in 2016 and Egypt in 2017.