Chabat’s Shilly-Shallying, a Way of Being or a Tactic to Baffle the Enemy? 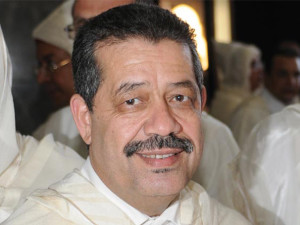 Hamid Chabat, the Secretary General of the Istiqlal Party, has been threatening for months now to withdraw from the coalition government, led by Abdelilah Benkiran’s Party for Justice and Development (PJD), if his repeated calls for a cabinet reshuffle were not heeded.
Likewise, he has not missed any opportunity to lash out at the head of the government and at the cabinet’s performance that he describes as “weak”. However, over the past weekend, during a meeting of the league of the Istiqlal Party’s economists, Chabat, while vehemently criticizing the PJD ministers, made it clear at the same time that his party will not quit the governmental coalition.
Although they think they know the man and his tactics, analysts are nonetheless baffled by Chabat’s changing stands. Last January, he sent Benkirane  a 30 page memorandum, asking him to assess the performance of the coalition cabinet and hinting once more to the probability of quitting the government. Chabat had also affirmed then that his party’s National Council will have to decide, at a meeting scheduled for next April, whether the IP will remain in the coalition or not. Then, last weekend, long before the National Council’s meeting, he ruled out the contingency to quit the government.
Chabbat’s Shilly-Shallying remains largely misunderstood but some commentators say it is just his way of being while others deem it is a well-thought tactic he uses to confuse the enemy and at the same time stay in the limelight and make the headlines.
Other analysts have however explained last weekend’s assertion that the Istiqlal Party has no intention to withdraw from the government, an eventuality that would plunge Morocco in a political crisis, by the latest developments in some neighboring countries, namely Egypt and Tunisia.
Chabat changed his stand to spare the country a chaos like the one prevailing in some North African states, say these analysts who underscore however that the bones of contention still exist between the two parties.
One of their latest declared divergences concerns the PJD championed reform of the compensation fund. Under the reform the state will gradually decrease the subsidies to essential products that it used to give to make these products available at reduced prices.
Chabat calls for conducting a census of the poor households before embarking on any reform to make sure that these poor will not be severely affected by the price increases. Abdelilah Benkirane and his party’s ministers try to be reassuring as to the impact of the compensation fund reform. They claim that the reform will result in a 43 percent increase only of prices of some products.
No later than Monday, Benkirane denied the rumors being circulated as to the impending increase of prices of some commodities, such as gas bottles, hinting that such rumors are mainly meant to hamper the reforms initiated by his government.
Anyways, while the indirect exchange of remarks and criticism between Benkirane and Chabat and between PJD and IP members continues, Mohand Laensar and Nabil Benabdellah, the leaders of the other two parties participating in the government coalition, namely the Popular Movement and the Party for Progress and Socialism, are trying to narrow the gap between the PJD and the IP leaders.
Part of their mediation  to defuse tension between the two men and spare the country a political crisis, Laensar and Benabdallah are determined to do their best at the upcoming meeting of the four coalition parties, scheduled for next Friday, to bring the standpoints of Chabat and Benkirane closer to safeguard the governmental coalition from collapse.
Will they succeed? It will all depend on the two conflicting men’s flexibility and willingness to bury the hatchet.