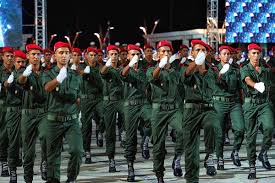 King Mohammed has stressed the importance of military service for the young people, saying the conscription “enhances the sense of belonging to the homeland”.

Addressing on Friday the members of both Houses of Parliament, at the opening of the parliamentary fall session, the Moroccan Sovereign, who spoke for the first time of the new compulsory military service to enter into force in 2019, made it clear that it will concern all Moroccans, without distinction.

With regard to performing military service, “it must be emphasized that all the Moroccan citizens concerned – without exception – are equal, regardless of social background, diploma or education”, said the Monarch.

The draft also “gives access to training which opens up opportunities for the professional and social integration of qualified conscripts who demonstrate a sense of responsibility and commitment”.

Morocco has officially restored military service for young people aged between 19 and 25 years for 12 months. Last month, a draft law had been approved by the Ministers’ Council chaired by the King. It reinstates the military service, which was banned since 2006.

At the end of the 12-month training period, young people who completed the service would receive payment according to the Bill. It promises to reward conscripts with grades according to the Royal Armed Forces’ current hierarchy standards.

“The bill sets out the duties of conscripts during military service and the rights and guarantees given to them, in the same way as elements of the Royal Armed Forces,” the spokesperson for the royal palace, Abdelhak Lamrini had said at the end of the Ministers’ Council.

“The purpose of applying military service is to inculcate the spirit of patriotism in young people as part of a correlation between the rights and duties of citizenship,” he added.

Military service “also opens the way to their integration into professional and social life, especially for those who demonstrate skills and a sense of citizenship and discipline, particularly in terms of integration into the various military and security forces,” underlined the spokesperson for the royal palace.