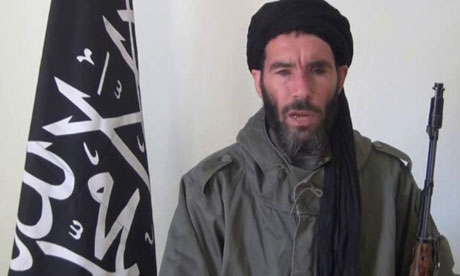 U.S. military had planned few years ago airstrikes against Algerian Jihadist Mokhtar Belmokhtar but the U.S. ambassador to Mali at that time opposed the plan, saying such action could trigger a backlash against Americans, reported the Washington Post.
This Algerian terrorist, an Afghan war veteran, was closely watched by the U.S. intelligence military across the Sahara in 2003 when it faced a difficult choice of whether it should kill or capture the target, added the US newspaper.
According to the daily, the U.S. counter-terrorism is still dealing with the fallout of such a decision and missed opportunities.
Belmokthar, who was born in the Algerian city of Ghardaia in June 1972, was about to be blacklisted in 2003 by the United Nations for supporting the Taliban and al-Qaeda, but the UN stopped short of doing so because at that time he had not killed any American and did not appear to pose a threat outside his nomadic range in northern Mali and southern Algeria.
Since then, Belmokhtar has gradually built a regional al-Qaeda branch while expanding his network through kidnappings of foreigners for ransoms and smuggling arms from troubled neighboring countries.
Last month, his group, “Signatories in Blood”, captured several foreign workers including American nationals after attacking a gas plant in Southern Algeria.  Some 40 foreign hostages (including three Americans) and 29 Islamist militants were killed during the assault launched by the Algerian forces after a four day standoff.
This terrorist attack was launched to punish Algeria for allowing French jets to use its airspace to attack al-Qaeda-linked rebel groups in Mali. The hostage-takers demanded France to end its military operations in northern Mali and the release of militants jailed in Algeria.
According to some analysts, Belmokhtar is a product of his country’s history. When he travelled to join the Jihadists in Afghanistan, he was only 19 and when he returned home he joined a bloody revolt and learnt that wars do not necessarily end. He grew up speaking the language of his country’s former colonial power, France.
He is always seen with Kalashnikov at his feet and accompanied with the image of Bin Laden. He is a canny man who realized the importance of the Islamic project in northern Mali wherein northern Arabophone Tuareg-Berbers refuse to be governed by a black administration in the south. He was drawn to this hotbed zone – like Bin Laden in Afghanistan – a land where centralized power was weak or non-existent.
CATEGORIES AlgeriaAmericasFeaturesHeadlinesInternational
Share This