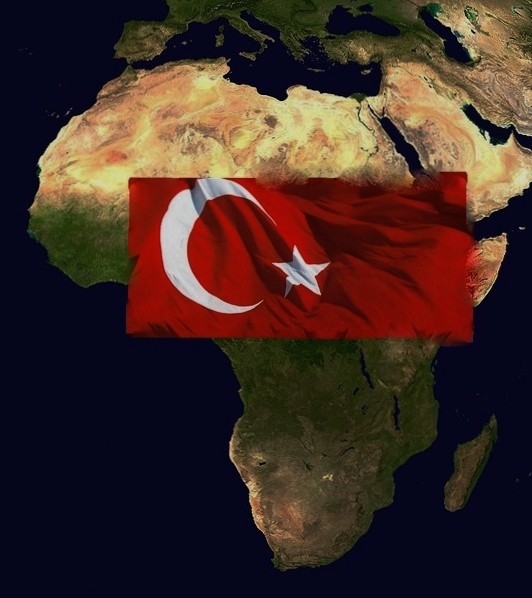 It is not a secret that the relationship between Turkey and the European Union is going through a rough period. The solution to this deadlock for Ankara is to diversify away from the declining European economy and search for new markets which will also provide Turkey with a more prominent role on the world stage. The African continent has been a good candidate for this effort. The drive initially started when Turkey began its successful campaign to be elected to the UN Security Council for the 2009-2010 period. Comprised of over fifty countries, Africa represents more than a quarter of UN members and, consequently, it is a potential repository of votes for a state, such a Turkey, willing to invest politically in the region. Whatever the real reason, the reality today is that Turkey’s relationship with the African countries has been increasingly strengthened in recent years.
In the past three years, Turkey has opened 19 new embassies on the continent. Traveling to the region has also become easier – last month, Turkish Airlines (the 49 per cent state-owned airlines company in Turkey) announced the start of direct flights to Niamey, Ouagadougou, Yaoundé and Douala, bringing the number of destinations in sub-Saharan Africa to 24. As an outcome of these growing diplomatic and transport ties, Ankara’s commerce with sub-Saharan Africa jumped from $742m in 2000 to almost $7.5bn in 2011. Particularly the Turkish construction sector is expanding from North Africa to the oil- and gas-rich countries of Western Africa.
The continent is regularly receiving lots of visitors from Turkey. Turkish officials identify specifically Somalia as a measure of their serious intentions – it then did not come as a surprise that, in 2011, the Turkish Prime Minister Recep Tayyip Erdogan became the first non-African leader in almost two decades to visit Somalia. Erdoğan’s recent visit to Africa was between January 7-11 2013 to Gabon, Niger and Senegal where he was also accompanied by the president of Turkish Co-operation and Co-ordination Agency (TİKA), Mr. Serdar Çam.
TİKA is particularly important for Turkish-African relations as the agency has established eight program co-ordination offices and embarked upon projects in a total of 37 countries in Africa. The major developments are achieved under the project ‘Fight with desertification and drought in the least developed and developing countries of Africa’. The construction of a 70 kilometer-long waterway in Harar, an eastern city in Ethiopia, and the establishment of a Turkey-Niger Friendship Forest can be given as successful examples of this project. The second category of projects is designed to deal with the problem of deaths of mothers during pregnancy and childbirth. Sudan is the country that has the highest number of such deaths.
According to 2011 figures of the World Health Organization (WTO), out of 100.000 births, 750 result in death. The main reason underlying this problem is the lack of qualified midwives. In that sense, a protocol was signed between TİKA and Sudan Ministry of Health, which aims to meet the need for educated and qualified midwives in Sudan, the development of midwife educational system that is still conducted within the framework of traditional methods, and, last but not the least, the transfer of Turkey’s experience in this field to Sudan. Along with this project, a working visit to Turkey was organized, which included a group of 10 people chosen among the top managerial positions in the Ministry of Health. In Turkey, they were provided with courses on leadership, management, strategic planning and research and were expected to transfer the knowledge they gained in Turkey to places chosen by the Ministry of Health in Sudan. This project is expected to contribute to gradual elimination of the causes that lead to needless deaths of mothers in Africa.
However, one must be cautious when evaluating the Turkish role in Africa. Indeed, the biggest danger for Turkey is to over-promise – it is more than obvious that Ankara’s $800bn economy is no match for the resources that are available to Brussels or Beijing, both of which also consider themselves as role models for the development in Africa. Turkey is clearly aspiring to serve a successful role model on the African continent, aided by the close contacts it has established and the projects it has conducted in recent years. Yet, Ankara should also realize that its ‘charm offensive’ is far from having the same effect in Africa as similar policies implemented by China or the European Union.
CATEGORIES ColumnsOpinions
Share This

North Africa Post's news desk is composed of journalists and editors, who are constantly working to provide new and accurate stories to NAP readers.
NEWER POSTEgypt: Situation back to Normal in Port Said
OLDER POSTObama’s Second Inaugural Address – No Foreign Policy Strategy Yet