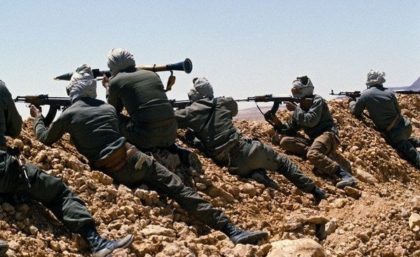 Although it is self-evident that Algeria backs the separatist Polisario fronts militarily, financially and diplomatically, Algiers refuses to pull its head out of the sand and formally acknowledge its responsibility in perpetuating the Sahara conflict.

While Algerian officials and diplomats maintain that their country is not concerned with the Sahara issue, the Polisario has unveiled the truth in a message of gratitude to its paymaster and mentor.

The Polisario’s leadership has issued a statement following its eighth general secretariat meeting expressing recognition for the “continuous unconditioned support to the struggle of the Sahrawi people for freedom and independence.”

The Polisario has acknowledged receiving full support from the Algerian regime in their separatist plot, which it described as a “goal in line with the principled positions” of Algiers.

The statement is a stark proof of Algiers responsibility in averting any political solution to the Sahara issue. By recognizing the Polisario separatists as an independent state and in offering the separatist militias a safe haven within the Algerian territory, Algeria has prejudged the outcome of the UN peace process and condemned Moroccan-Algerian ties to tension and the Maghreb region to instability.

Morocco whose autonomy initiative for the Sahara artificial dispute fell on deaf Algerian and Polisario ears has made it clear that any future talks on the Sahara should involve Algeria as a direct party to the conflict.

Rabat has also found that it is a waste of time to negotiate with a puppet that has no independent decision-making ability as the Polisario’s strings are pulled from Algeria where a solution of the Sahara conflict should be found.

Meanwhile, the Polisario’s propaganda are eroding as support for the Algerian separatist scheme in the Sahara is waning at the continental level.

The European Court of Justice in its latest verdicts on the Sahara has omitted to mention the Polisario. Legal experts at the court said in previous notes that the agreements between Morocco and the EU do not concern the Polisario and that the separatist group is not entitled to claim representativity of the people in the Saharan provinces.

As the foreign exchange reserve of Algiers dwindle, so does the separatist thesis in the Sahara, further proving Algeria’s responsibility in keeping the conflict going.