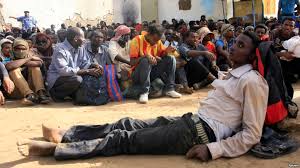 For the first time, the UN Security Council has announced sanctions against six major traffickers operating in Libya. The sanctions, which show the toughening of international community against human traffickers, include a global travel ban and an assets freeze.

According to Western diplomats, these sanctions send a strong message to human traffickers and smugglers that the international community does not tolerate such abuses of human rights and human dignity.

African migrants captured in Libya endure horrific treatment, including arbitrary detention, torture, forced labor, extortion and unlawful killings, while some others were sold as slaves, according to UN migration agency and human rights watchdogs.
Last week, Libya signed an agreement with its southern neighboring countries Niger, Chad and Sudan to secure the joint border against human and weapons smuggling.

The four-way agreement is meant to control and secure Libya’s sea and land borders and to strengthen cooperation on joint border control.

Seven years after the fall of the Gaddafi regime, Libya remains battered by infighting between heavily armed militias and a political crisis that has divided the country into two parts: the internationally recognized Government of National Accord (GNA) and a rival administration backed by military strongman Khalifa Haftar in the east.

The Libyan political rival leaders have lately agreed in Paris to hold inclusive and peaceful elections by the end of this year. The UN Security Council has reaffirmed its full support for the UN Action Plan for Libya and renewed its call for all Libyans to work together in a spirit of compromise in the inclusive political process under the leadership of the Special Representative of the Secretary-General, Ghassan Salamé.

The Security Council also underscored the importance of the role of the United Nations to facilitate a Libyan-led political solution to the challenges facing Libya and welcomed all efforts to strengthen an inclusive political dialogue among all Libyans, including important efforts by Libya’s neighbors, international partners and regional organizations.