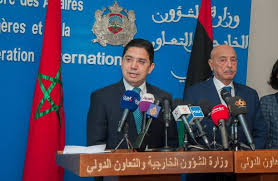 At the initiative of Morocco, an unprecedented meeting gathered Monday night in Rabat the Speaker of the Tobruk-based Libyan House of Representatives, Aguila Salah Issa Gweid, and the president of the Libyan High Council of State, Khaled al-Machri.

The two Libyan dignitaries, whose positions differ in part over the Skhirat peace agreement, signed in 2015 in Morocco, met for the first time at a dinner offered in their honor by the Moroccan government.

Prior to the dinner, the two Libyan officials held separate talks with Foreign Minister Nasser Bourita. They also held talks with the Speaker of the Moroccan Parliament.

The two Libyan dignitaries’ meeting is part of Morocco’s mediation efforts to find a way out of the Libyan crisis, based on the Skhirat agreement.

Morocco will play a leadership role in speeding up the settlement process of the Libyan crisis that ensued the fall of the Gaddafi regime, Speaker of the Tobruk-based HoR told the media upon leaving Rabat on Tuesday.

“We have officially asked the Moroccan government to kindly urge the Libyan parties, as well as the UN envoy, to speed up the crisis settlement process,” and to present the required proposal to change the political agreement so that Libya comes out of the current crisis, he said.

Aguila Salah Issa also told the media in Rabat that the Skhirat Agreement remains the appropriate framework to settle the Libyan conflict, noting, however, that the current context and political situation in the country push for some changes to this framework in order to meet the aspirations of all parties.

The Skhirat agreement is the sole platform that brings together all Libyans, and is a political framework for a transitional phase that will enable Libya set up “legitimate and strong” institutions, Bourita said at a press briefing following talks with the Speaker of the internationally-recognized House of representatives.

He noted that the agreement offers a sound platform for resolving the crisis that has been rattling Libya for years adding that that this agreement, which constitutes a common basis for all Libyans, could be adapted, if necessary, to current circumstances, while accommodating the stands of the Libyan factions.

He stressed the need to speed up the completion of the transitional phase to hold municipal, parliamentary and presidential elections and thus establish “legitimate institutions”.

Speaker of the Tobruk-based HoR also stressed the urgent need to reach a political agreement to “save Libya, unify its institutions and ensure a dignified life for its people.”

Aguila Salah, who was upbeat regarding the situation in his country, said that before the end of the current year, the problems in Libya will be solved and a national unity government will be formed.

Head of the High Council of State, Khalid Al-Mishri, on his part pointed out after his meeting with Bourita Monday that Morocco has played an “exemplary and positive” role in resolving the Libyan crisis, unlike other countries that have favored their own interests to the detriment of Libya.

“We have never been so close to a consensus on many points of divergence”, Al-Mishri noted, stressing that there is now a “clear willingness” to emerge from the Libyan crisis.

Morocco has a “clear and consistent” stance, which consists in supporting Libya, the political process in this country and the dialogue between the various parties, Bourita insisted.

“The stability of Libya is part of the stability of the entire Arab Maghreb region,” Bourita said, adding that the doors of Morocco are always open to all parties to advance towards the settlement of this crisis in order to fulfil the aspirations of the Libyan people.

The UN has recently confirmed that the Skhirat agreement remains the only appropriate framework for resolving the Libyan crisis.

The Arab League summit held mid-April in Saudi Arabia has also voiced support to efforts seeking to reach an agreement and end the Libyan crisis through national reconciliation in accordance with the Skhirat agreement.

The Skhirat Agreement was signed in December 2015 in Skhirat (30 km south of Rabat), by representatives of all parties taking part in the inter-Libyan dialogue, held under the aegis of the UN support mission in Libya.