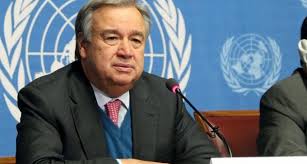 Convinced of the involvement of Algeria in the regional conflict of the Sahara through its funding, hosting and arming the Polisario separatist group, UN Secretary-General has urged, in his latest report to the Security Council, Algeria to “make important contributions to the political process” and to step up “its commitment to the negotiation process”.

In his annual report on the Sahara, the UN chief Antonio Guterres said that in the era of global interdependence, “the socio-economic, humanitarian and security consequences of this protracted conflict weigh heavily on regional and sub-regional integration”.

He recommended to the Security Council the extension of MINURSO’s mandate for another 12 months until April 30, 2019 and called on the parties to continue to work with his Personal Envoy Horst Koehler “in this new spirit and dynamic and to truly engage in the negotiation process in accordance with the guidelines established by Security Council resolutions”.

In his report, Guterres underlined Morocco’s commitment to engage in the current dynamic and to fully cooperate with his Personal Envoy for the Sahara.

The text recalls the stand of Morocco, which rejects any settlement of the Sahara issue outside its full sovereignty, puts on the table a “serious & credible” autonomy plan for its Southern provinces and calls on the parties to this regional conflict to fully assume their responsibility for reaching a solution.

For the North African Kingdom, the Security Council is the only international body entitled to oversee the settlement process and opposes any obsolete proposal aimed at diverting the settlement plan from the agreed benchmarks.

Regarding Polisario’s incursions in Guerguerat buffer zone, Guterres reiterated in his report that was submitted Wednesday to the Security Council, the United Nations’ firm position, saying that “civilian and commercial traffic should not be obstructed and no action should be taken, which may constitute a change to the status quo of the buffer strip.”

While commending Morocco’s stand, the UN report called on the Polisario “to withdraw from the buffer zone as it did in April 2017”.

Morocco, which remains committed to the UN-brokered 1991 cease-fire agreement, had strongly condemned the deployment of Polisario militiamen in the demilitarized border crossing with Mauritania, in Guerguerat, as a blatant violation of the UN brokered ceasefire agreement and a disregard for the calls made by the UN Secretary General for the withdrawal of all troops from the demilitarized buffer strip.

The UN repeatedly warned the Polisario against obstructing commercial traffic flow between Morocco and Mauritania and called on the separatists to pullout of the buffer strip in order to create an environment conducive to the resumption of dialogue under the auspices of the Personal Envoy Horst Kohler.