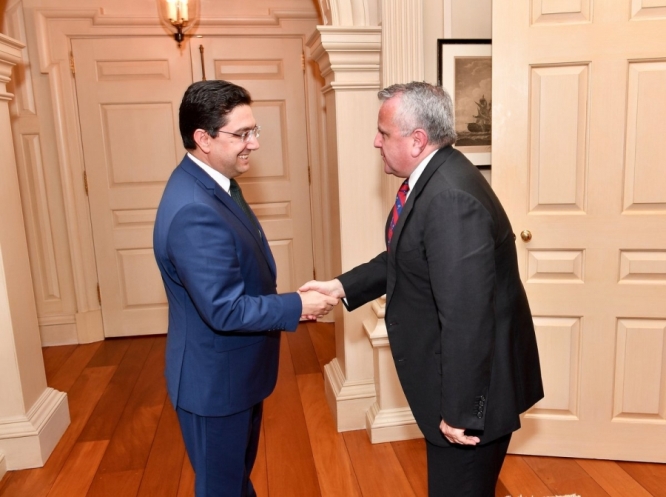 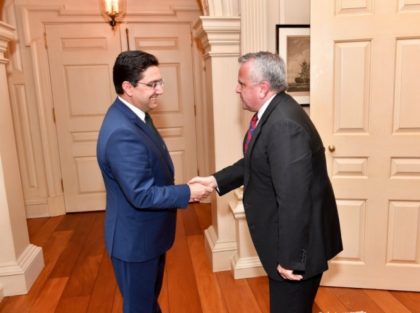 Washington Renews Backing to UN Efforts to Settle Sahara IssueThe United States on Tuesday renewed backing to the ongoing efforts made by the United Nations to find a peaceful, sustainable, and mutually acceptable political solution to the Sahara Issue.

This came during a meeting at the State Department between Acting Secretary of State John J. Sullivan and Moroccan Foreign Minister Nasser Bourita.

The two officials discussed “the deep U.S.-Morocco bilateral relationship and regional issues, including efforts towards achieving regional peace‎,” Spokesperson for the State Department, Heather Nauert, said in a statement.

“The United States also expressed its commitment to United Nations-led efforts to find a peaceful, sustainable, and mutually acceptable political solution to the long-standing dispute over the Western Sahara,” the Spokesperson said.

Bourita arrived earlier Tuesday in Washington, coming from Paris, where he held talks with his French counterpart, Jean-Yves Le Drian. He is also expected to meet the UN Secretary General Antonio Guterres in New York.

Bourita’s trips came against the backdrop of the Polisario’s latest provocative acts in the Moroccan Sahara, as the separatist front deployed armed elements in demilitarized areas, including, in Mahbes, Tifariti and Bir Lahlou, to the east of the Moroccan defense berm. Morocco made it clear in a letter to the Security Council Sunday that it shall not tolerate the transfer of any military or civilian structure of the Polisario to the buffer zone that is under the exclusive control of the MINURSO, in line with the ceasefire agreements signed in 1991.

In a reading of Heather Nauert’s statement, analysts in Rabat underscore two key points. The first is that any solution goes imperatively and exclusively through the United Nations. This crushes the expectations of the Polisario and its Algerian mentor to have the Sahara issue subject of wider consultations with third parties, such as the European Union and the African Union.

The second point is that at no time does the Tuesday statement refer to a self-determination referendum, an option, although deemed obsolete by many pundits and UN officials, is still upheld by the separatists.

The fact that the word self-determination does not appear in the US State Department’s communiqué is particularly noteworthy and resonates as a pragmatic approach to a case where the option of a referendum is both obsolete and unrealistic.

Analysts also explain that the latest frenzy moves of the Polisario and its attempts to settle in the buffer zone, at the orders of Algeria, which seemingly seeks to transfer the civil populations of the Tindouf camps towards the buffer zone, is an evidence that the separatists and their allies came to the conclusion that the referendum option is no longer viable and should be dropped from their own agenda.

Relatedly, the UN Secretary General, António Guterres, did not mention in his 2017 report on the Sahara the impracticable option of the self-determination referendum. This option does not appear either in the draft of the report that he will submit to the Security Council later this April. The UN Chief calls for a new dynamic and a new spirit of compromise and realism. He likewise insists on “a political solution on the basis of the guidelines given by Security Council resolutions since 2007,” i.e. since Morocco proposed the Autonomy Initiative for the Sahara, deemed by the UN body and the international community as serious and credible.