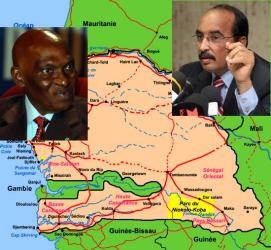 A crisis is brewing between the two West African neighbors, Mauritania and Senegal. It all started after Mauritanian coast guards shot dead two Senegalese fishermen.

The incident has propelled Senegal to deploy a warship in its sea borders with Mauritania.

Senegalese voiced their outrage at the killing of the two fishermen with hundred protesters taking to the streets of the northwest coastal city of Saint-Louis.

The protests turned violent attacking shops owned by Mauritanians and overturning cars, setting them ablaze, before police moved in with tear gas to disperse them.

Mauritanian news sources said that the coast guard opened fire after the Senegalese fishing boat with nine members on board were found operating in Mauritania’s territorial waters near the border between the West African neighbors.