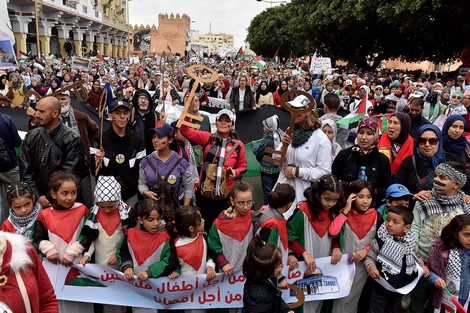 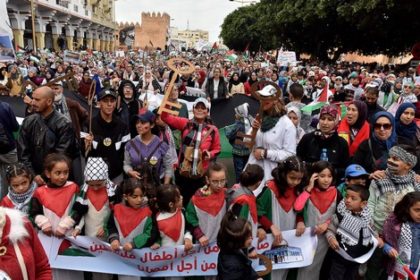 Thousands of Moroccan protesters took to the streets in downtown Rabat Sunday to protest United States President Donald Trump’s decision to recognize Jerusalem as the capital of Israel.

Members of the Moroccan cabinet and several political figures participated in the protest demonstration.

On the eve of the popular protest, Moroccan Foreign Minister Nasser Bourita reiterated Morocco’s firm and unwavering support to the Palestinians’ legitimate rights during an emergency meeting of the Arab League Foreign Ministers. He stressed that “pragmatic actions” need to be taken against the US, following its decision on Al Quds.

The Arab League meeting called on Trump to rescind the decision, which carries the risk of engulfing the region in a new bloody conflict.

King Mohammed VI, Chairman of the Al Quds Committee, has expressed “deep concern” regarding Trump’s decision. In a letter to the UN Secretary General, Antonio Guterres, the King said that altering the status of Al Quds is an “Infringement of the internationally recognized legal and historical status of Jerusalem”. He added that this “runs the risk of hurling the issue into the quagmire of religious and ideological conflict.”

Trump’s reckless decision has sparked protests across the Muslim world, with the largest being staged in Lebanon, Jordan, Indonesia, Turkey, Malaysia and Pakistan.

The UN Security Council also held an emergency meeting on Friday and all its members widely condemned Trump’s unilateral move, which sparked deadly protests in the Gaza Strip and the occupied West Bank immediately after it was announced last Wednesday.

North Africa Post's news desk is composed of journalists and editors, who are constantly working to provide new and accurate stories to NAP readers.
NEWER POSTMorocco: Head of The Government Takes Leadership of His PJD Party
OLDER POSTAnother Chinese Giant Sets up an Electric Transportation Eco-system in Morocco