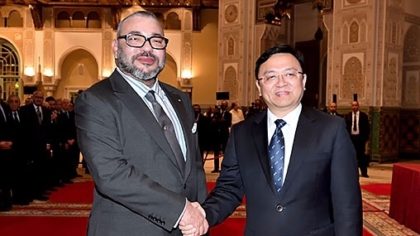 As a result of the firm resolve of King Mohammed VI of Morocco to revitalize and modernize his country’s infrastructures and diversify partnerships with major world players, and part of his efforts to promote transition to renewable energies and ensure green mobility, Chinese group BYD Auto Industry Company will set up an electric transportation system in Morocco.

The project was presented Saturday in Casablanca at a ceremony chaired by King Mohammed VI. The ceremony was also marked by the signing ceremony of the memorandum of understanding related to this project

Before the ceremony, the Monarch received at the Casablanca Royal Palace, chairman of the Chinese group BYD Auto Industry Company Ltd, Wang Chuanfu.

The agreement reflects the excellent political and economic relations between Morocco and China that witnessed a new momentum following the successful royal visit to the Asian country in May 2016.

The project will also contribute to the implementation of the King’s enlightened vision for the development of relations between China and African countries, said minister of industry Moulay Hafid Elalamy during the ceremony.

The Kingdom has become a well-known competitive platform in the field of car production, the minister added.

The project will be implemented on a 50-hectare site and will create 2,500 direct jobs, he said, adding that the project includes a factory to build battery-powered passenger cars, buses and trucks.

For his part, Chairman of Chinese group BYD Auto Industry Company Ltd, Wang Chuanfu, hailed the excellent relations between China and Morocco, pointing out that “BYD is pleased to cooperate with Morocco on this project, and to share its experience in several countries in recent years in the development of electric mobility systems”.

Cooperation between BYD and Morocco sets a model for other countries who seek to develop innovative energy solutions, Chuanfu said.

This precursor project of BYD, which introduces new specializations in the Kingdom, resolutely inscribes Morocco in the dynamics at work at the world level of developing new forms of transport, combining efficiency and respect for the environment.

The ecosystem organized around BYD thus reinforces Morocco’s strategic choices, under the leadership of King Mohammed VI, and through this strategic partnership, the Kingdom joins forces with a pioneer player in renewable energies and electric mobility sector.

The project, the first of its kind in Africa, integrates the electricity transport sector, whose production will be destined to both the local market and to export.
This new success is attributable to Morocco’s numerous assets, notably its positioning as a competitive platform for automotive production and its being host to leading operators in high-tech sectors, such as composite materials, automotive lighting or connectivity.

The China-Africa Investment Forum held in Marrakech on November 28 with the participation of 400 business executives from across Africa and China, concluded that thanks to its advanced infrastructure, close ties with African economies and its advanced ports and free zones, Morocco offers a platform for Chinese businesses willing to expand in Africa.