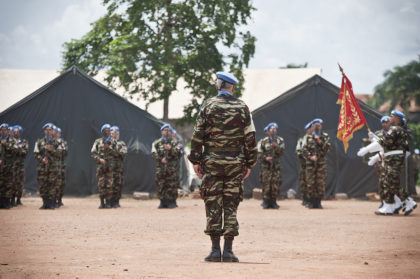 “We are grateful to Morocco for its continued contribution to the maintenance of the United Nations peace and its commitment to contribute to preserving peace and security,” said Birnback in an interview with Morocco’s news agency, MAP.

He noted that Moroccan peacekeepers have shown commitment and dedication in performing the lofty duties assigned to them in conflict-stricken countries such as the Democratic Republic of Congo and the Central African Republic.

Furthermore, the UN spokesman pointed out that the Moroccan contingent in the Central African Republic is deployed “in some of the most difficult areas of the country” and is now in the south-east of the CAR, namely Bangassou, Zemio, Rafai and Obo.

Last October, UN Secretary General Antonio Guterres visited the headquarters of the UN Multidimensional Integrated Stabilization Mission in the Central African Republic (MINUSCA) where he paid tribute to the sacrifices made by uniformed personnel in the service of peace, including the Moroccan contingent, which lost some of its members in the line of duty.

Morocco is contributing 1470 peacekeepers in MINUSCA, which has a total of 12,870 uniformed personnel including 10,750 military personnel and 2,080 police personnel.

MINUSCA has been tasked to protect the civilian population from threat of physical violence, support the political transition process and the efforts seeking to address root causes of the conflict and establish lasting peace and security in the CAR.