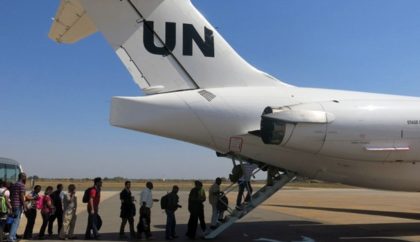 UN Secretary General Antonio Guterres appointed Canadian diplomat Colin Stewart as his Special Representative for the Sahara and Chief of the UN mission, the MINURSO.

“The Secretary General is grateful to Bolduc for her strong leadership and perseverance during her mandate,” Dujarric added.

In March 2016, Morocco expelled the 84 international civilian personnel staffed on MINURSO, after verbal blunders by the former UN Secretary General Ban Ki-moon who, during a visit to the separatists’ rear-base of Tindouf, referred to Morocco’s presence in its retrieved southern provinces as “occupation”.

In July 2016, Morocco agreed to restore the full functionality of the MINURSO in line with its initial mandate, while requiring the MINURSO staff to uphold neutrality and non-interference.

The MINURSO was established in 1991 to monitor a cease-fire and organize a referendum on the status of the Saharan provinces. The plebiscite never took place due to irreconcilable disagreements over who is eligible to vote. Since then, cease-fire monitoring as well as other military tasks constitute the bulk of the MINURSO’s tasks.

After more than a decade of failed attempts to organize a referendum on the status of Western Sahara, the UN decided in 2002 to abandon the idea and instead pursue a negotiated political solution to the conflict. In 2007, Morocco proposed a compromise solution based on broad autonomy for the Sahara under its sovereignty.