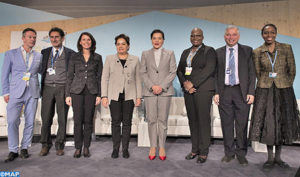 In an address she delivered at the session, Princess Lalla Hasna, who is the youngest sister of Morocco’s King, underscored the paramount importance of education for sustainable development, as an essential lever to deeply change the behavior of citizens and face the challenges of global warming.

Article 6 of the UNFCCC and article 12 of the Paris Agreement underscore the importance of education, training, public awareness, public access to information and international cooperation as essential tools to effectively combat climate change, she recalled, insisting that efforts made in the field of education for sustainable development have become the mandatory matrix of any action in favor of the environment.

Princess Lalla Hasna also surveyed the efforts made by Morocco in matters of environment protection that has been erected as a pillar of development, pointing out that a major stride was made in 2011 when the right to a healthy environment and sustainable development were enshrined in the Moroccan constitution.

The National Charter for Environment and Sustainable Development, adopted later on, set the basic goals of the State’s action in the field, such as including the culture of environment protection in education and training syllabi, she recalled.

After she underlined the importance of COP Education days as a platform to share expertize and educational methods in terms of global warming, she spoke of her Foundation’s projects, working methods and goals. She highlighted in particular two programs on environment education the foundation is spearheading, namely “Eco Schools” and “Young Reporters for Environment”, in addition to its involvement in awareness-raising campaigns and environment education. She conceded however, that much remains to be done.

On the sidelines of the Education Day session, the Mohammed VI Foundation for Environment Protection and the UNFCCC signed a memorandum of understanding under which they will reinforce their cooperation to carry out provisions laid down in article 6 of the framework convention on education, training, awareness raising and public access to information.

The Moroccan Foundation has been since 2009 an observer member of the UNFCCC and regularly participates in the COPs.