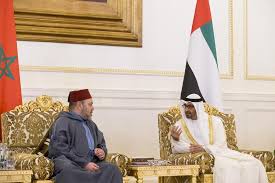 After a meeting, attended by the members of the delegation accompanying the Monarch and UAE officials, King Mohammed VI and Sheikh Mohammed held private talks.

They also discussed the brotherly and excellent ties binding the two countries and their multi-faceted strategic partnership, and agreed, in order to enhance further the economic relations, to give a new momentum to the Morocco-UAE joint commission.

Sheikh Mohamed emphasized in this regards that the UAE would continue its longstanding approach of strengthening its distinguished ties with Morocco, reported the UAE news agency WAM.

King Mohammed, who attended on Wednesday the official inauguration of the Louvre Abu Dhabi and who offered the cultural institution Moroccan artworks dating back to the 19th century, congratulated the UAE for this cultural landmark in the region, underlining that the museum conveys a noble message, that of the values of tolerance, coexistence and peace.

After his visit to the UAE, King Mohammed will visit Qatar, where he is expected on Sunday Nov.12 article states.

The King’s visit to the Gulf is the first since the outbreak of the crisis opposing Qatar to its neighbors, the UAE, Saudi Arabia, and Bahrain.

Many analysts saw in this visit a potential to defuse the Gulf crisis, given the close ties binding Morocco and the member states of the Gulf Cooperation Council (GCC).