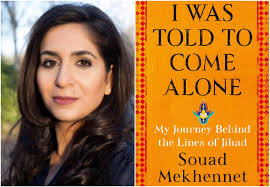 The Washington Post security correspondent and author Souad Mekhennet, a German national of Moroccan origin, will receive Daniel Pearl award 2017 in recognition for her courage and integrity in journalism.

According to the Chicago Journalists Association, which made the announcement, Souad is the first Muslim reporter to be honored with this prestigious award for venturing behind the lines of Jihad to interview the world most wanted people.

The award will be handed over to her during a ceremony to be organized Nov.10. This prize was created by Los Angeles Press Club after Wall Street Journal reporter Daniel Pearl was killed by Islamic terrorists in Pakistan in 2002.

Now, Daniel’s eponymous award, bestowed every year since by his parents, Judea and Ruth Pearl, honors reporters who file their revelatory stories under threat, sometimes under fire. The Daniel Pearl Foundation promotes mutual respect and understanding among diverse cultures through journalism, music and dialogue.

Besides working for the Washington Post, Souad Mekhennet also featured on the New York Times and Der Spiegel, as well as other publications. She is a graduate of the Harvard’s Weatherhead Center for International Policy, the John Hopkins School of Advanced International Studies, and the Geneva Center for Security Policy.

Souad Mekhennet, well-known for her coverage of terrorism, published lately a new book “I Was Told to Come Alone: My Journey Behind the Lines of Jihad”, in which she recounts her journey as a reporter going behind the lines of jihad in Europe and the Middle East and North Africa.

In her book, beginning in the German neighborhoods where the 9/11 plotters were radicalized and the Iraqi neighborhoods where Sunnis and Shias were turned against each other, Souad sheds light on the clash between the West and Islam that has been exploited by both extremists and opportunist politicians alike and discusses some of the complex reasons behind the radicalization of young Muslims and invites to a deep, thorough debate on the scourge of terrorism, its nature, causes and implications.

Her thorough investigation work allowed to disclose the identity of “Jihadi John”, the executioner who strutted in front of the cameras and exhibited the barbaric execution of people who were wrong not share his miserable vision of the world.

For her whole life, Souad, who was born and educated in Germany, has had to balance the two sides of her upbringing – Muslim and Western. She has also sought to provide a mediating voice between these cultures, which too often misunderstand each other.

Souad’s background has given her unique access to some of the world’s most wanted men, who generally refuse to speak to Western journalists. She is not afraid to face personal danger to reach out to individuals in the inner circles of Al Qaeda, the Taliban, ISIS, and their affiliates; when she is told to come alone to an interview, she never knows what to expect!

North Africa Post's news desk is composed of journalists and editors, who are constantly working to provide new and accurate stories to NAP readers.
NEWER POSTMorocco in Course of Launching National Prevention Mechanism against Torture
OLDER POSTMorocco Steps in to Pre-empt Radicalization of Muslim Youth in Europe